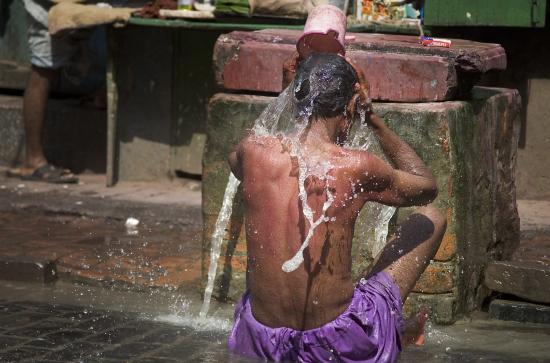 In December 2015, the international community pledged to limit global warming to below 2°C to prevent dangerous climate change. However, new analysis suggests that even if this target is met, the dangers to society posed by heat stress are likely to escalate.

Writing in the Proceedings of the National Academy of Sciences of the United States of America (PNAS), the scientists from Liverpool John Moores University and Loughborough University in the UK, and Maynooth University in Ireland, examined data from recent projections of climate change and population growth. They found that even if global warming is limited to as little as 1.5°C (relative to temperatures before the Industrial Revolution), in excess of 350 million more people living in megacities could be exposed to deadly heat episodes on an annual basis.

With this level of warming, South Asian cities will likely remain the most heat stressed over the coming century, but major world cities including Lagos, Nigeria and Shanghai, China may become newly heat stressed. For global warming of 2.7oC, which tallies with current commitments to greenhouse gas reduction, the largest city in the world at present – Tokyo, Japan is likely to be affected.

The researchers conclude that these large increases in global heat stress can be explained by two factors. First, the frequency of dangerously hot weather increases rapidly even for relatively modest rises in global average air temperature. Second, population is generally expected to grow fastest in low-latitude countries that experience relatively hot climates and temperatures already close to ‘dangerous’ thresholds.

The scientists undertook the analysis to explore the extent to which the ambitious climate change targets agreed in Paris, 2015, may avoid impacts that could be dangerous to society. Their findings highlight that even if these ambitious mitigation targets succeed, there is much left to do if society is to avoid the worst heat-stress impacts from rising temperatures.

Lead author Dr Tom Matthews, who is based at the LJMU School of Natural Sciences and Psychology explains: “Limiting global warming to 2°C is considered a very stern challenge to global society. However, our analysis shows that even if we are successful, global heat stress is likely to climb as a societal hazard. During 2015, for example, the South Asian cities of Karachi and Kolkata experienced deadly heat that killed thousands, providing a timely reminder of human vulnerability even in those accustomed to hot weather. Our results show that in a 2°C warmer climate, the likes of Karachi and Kolkata, could expect conditions equivalent to the deadly 2015 heat at least once per year. If we are to overshoot the Paris agreements, cities such as New York may experience heat stress in a 4oC warmer world.”

Co-author Conor Murphy, Maynooth University Department of Geography, added: “These findings highlight how sensitive heat stress is to climate change. We show that for even modest warming amounts, the global burden of heat stress will likely grow considerably. Because the response is ‘non-linear’, for each fraction of a degree the climate warms, the increase in heat stress is ever greater. That translates into progressively heavier impacts globally if the Paris targets are missed.”

Rob Wilby, Loughborough University, concluded: “Given the scale of the challenge ahead – even if we limit temperatures from rising much further – there will still be need for practical interventions to help manage the impacts of dangerously hot weather.  Improving early warning systems and support for those most at risk during heatwaves may help reduce the dangers faced by large city populations.”