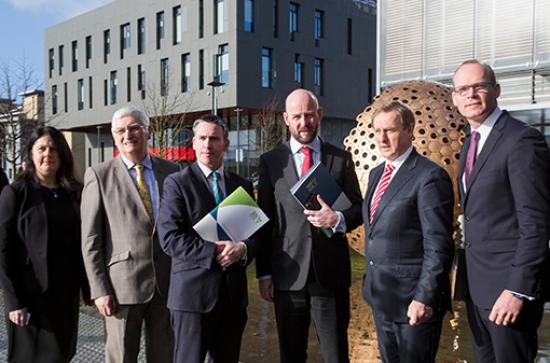 An Taoiseach Enda Kenny T.D., Minister for Housing, Planning, Community and Local Government Simon Coveney T.D., and Minister of State for Housing and Urban Renewal Damien English T.D.  today launched the Ireland 2040 National Planning Framework at Maynooth University. The plan represents a new approach to planning that will enable political, civic, and business leaders to guide our society and economy over the next 25 years.

The National Planning Framework (NPF) is a high-level and long-term initiative intended to coordinate the strategic planning of urban and rural areas, to secure overall proper planning and sustainable development, and to set out regional spatial and economic strategies and city and county development plans.

Maynooth University has played a key role in the development of the framework, with Professor Jim Walsh, Maynooth University Social Sciences Institute and the National Institute for Regional and Spatial Analysis (NIRSA), credited as a “driving force” behind the project from its earliest stages. Dr Chris van Egeraat, Maynooth University Department of Geography, is on the NPF advisory panel and heads up the Regional Studies Association in Ireland.

NIRSA led the way on documenting and mapping the spatial distribution of vacant residential units, and on identifying the scale and distribution of the phenomenon known as
"ghost estates." Other Maynooth researchers have identified and mapped the diversity and plurality of economic and social structures throughout rural Ireland, and another group has carried out extensive research on the social aspects of living in the suburbs and commuter towns.

AIRO, the All-Island Research Observatory also based at Maynooth University has played a central role in facilitating evidence based decision making.  It provided easily accessible geographical datasets to support decisions in relation to local economic and community plans and the forthcoming Regional Spatial and Economic Strategies. It will have a key technical support role to help decision making by the NPF team as the project progresses.

Discussing the importance of the framework, Professor Walsh noted: “In the current era of increased uncertainty and a disruptive political climate at an international level, it is vitally important that we have clarity on a long-term strategic vision and specific proposals and actions to achieve a much better quality of life and living standards for all our citizens by 2040.”

As part of Ireland 2040, the government launched the Issues and Choices consultation paper, which provides individuals, communities, organisations, businesses, local authorities, and state agencies across the country with a means to weigh in on the framework. The paper sets out recent trends and related risks as well as a number of choices arising from those risks.

Amongst the key issues identified in the document is a recognition that a continuation of a “business as usual” approach is not a viable option.  According to the paper, the targets set under previous initiatives can no longer be regarded as acceptable. It draws particular attention to the considerable pressures and responsibilities that Planners are going to have to address over the next two decades.

Professor Walsh observed: “The Issues and Choices document is to be commended for its clarity in setting out recent trends and related risks, for emphasising the inter-dependence of many issues, and for setting out some radical shifts in policy.  One of the more radical choices presented to stakeholders includes prioritising the strengthening of mid-tier cities, and replacing balanced regional development with effective regional development as an objective.  This obviously has real significance to our approach to major issues like the housing crisis and Foreign Direct Investment.”

“This is a provocative consultation paper, as it should be. In order to move beyond the status quo there will need to be a sober and evidence informed discussion of the risks and potential opportunities. Strong political and civic leadership will be required to maintain a distinction between truly national strategic objectives to be pursued distinctively over the long term, and reactionary responses at a local level,” concluded Professor Walsh.

Also attending the launch, Maynooth University President Professor Philip Nolan observed: “I warmly commend An Taoiseach and Minister Coveney for providing the people of Ireland with an opportunity to consider the many issues and choices that will have such a significant impact on our country over the next two decades. This long-term plan will take account the distinctive features of our society, economy, culture, heritage, and environment, and help us tailor investment to meet these needs.

We particularly welcome the emphasis on ‘place-making’ as the distinctive feature of this plan. Here in Maynooth we are highly aware of the positive impact that our surroundings have on students and staff, fostering creative thought, engaged learning, and a sense of community.

One’s individual sense of place as a factor in his or her overall health and well-being is more important than ever in today’s interconnected and globalised world. It is imperative that we have an adaptable high-level national planning framework for the Ireland of 2040."