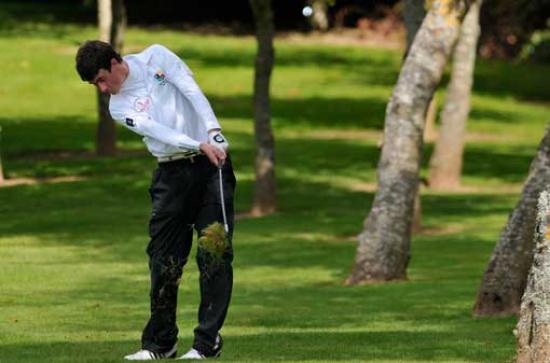 Maynooth University golf scholar, Gary Hurley displayed some magnificent golf last week to reach the final of the Spanish Amateur Championship at Sheery Golf, Jerez but was denied of the title at the final hurdle.

Irish international Hurley was two up with three holes to play and looked in pole position to clinch the title when his opponent Jeroen Krietemeijer of the Netherlands went birdie-eagle to level the match and then stole the title at the penultimate hole.

West Waterford native Hurley, drained a crucial 10 foot putt on the 15th to gain the upper hand and led by two holes with three to play but Krietemeijer bounced back by driving the short par 4 16th and made a birdie to Hurely’s par and then managed to find the par 5 17th in two shots and drained the eagle putt despite Hurley chipping dead from left of the green for a excellent birdie. The Maynooth University golf star was now faced with a final hole decider having lost his 2 holes advantage.

On the penultimate hole, Krietemeijer smashed an excellent drive down the 18th which ended up in pole position in which he found the green. Hurley’s tee shot went left and was unfortunate to find a bunker where he was unable to reach the green from the sand.  His third shot left him a long par putt which he missed and could only watch as Krietemeijer two putted for par to seal the win in an epic final match.

The Maynooth Golf Team captain was bidding to become the fifth Irish winner of the title after Philip Walton (1981), Michael Quirke (1987), Darren Clarke (1990) and Reeve Whitson (2013) but he could only take his hat off to Krietemeijer, who produced a superb finish to claim victory.

Hurley can take great confidence from his overall performance having beaten some of the top European amateurs on route to the final including two time European Amateur champion Ashley Chesters (Eng) in the semi-finals. The performance still puts Hurley firmly in position to make a serious claim for places in the European Palmer Cup team to face best the best college players in the US next June as well as the prestigious Great Britain and Ireland Walker Cup team to face the United States in September.

Hurley’s Maynooth teammate and fellow International Robin Dawson was also in action at the Spanish Amateur having fired rounds of 70 and 73 to finih tied 5th in the qualifying rounds. First year scholar, Dawson produced a superb performance in the first round of match play to beat fellow Irishman and Walker Cup star Gavin Moynihan by holding a monster putt on the the 18th to overcome his Irish teammate at the final hole. Interestingly, Dawson was beaten by the eventual champion Krietemeijer in the second round of match play. The Faithlegg native’s performance will be noted by both Palmer Cup and Walker Cup selectors as he too hopes to make a mark for both teams during the season ahead.

Both players will be in action for Maynooth University in the Irish Colleges Match Play Championship finals which takes takes in Woodbrook Golf Club, Bray from March 12th -13th. Maynooth have two teams in the Championship finals and will be hoping to win the title having finished runner-up the past two years.