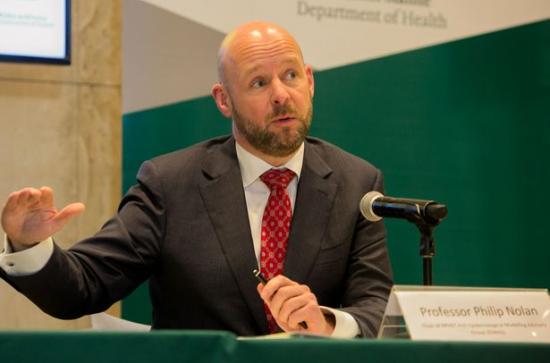 In March, Maynooth University President, Professor Philip Nolan, was appointed chair of National Public Health Emergency Team’s Irish Epidemiological Modelling Advisory Group (IEMAG), a group of more than 50 experts from across the university and agency sector charged with modelling the virus. He is also a member of NPHET, the National Public Health Emergency Team.
On March 30, MU President, Professor Philip Nolan, appeared alongside Chief Medical Officer Tony Holohan in his daily press conference.  He explained the models to date and said the government’s recent restrictions on social movement were having an “enormous effect” in reducing the number of new cases of coronavirus.
We know what an unmitigated epidemic looks like; we are not on that track.” Yet, he also warned there was “no room for complacency.”
MU Professor Chris Brunsdon, with the National Centre for Geocomputation and Maynooth University Social Sciences Institute, is also contributing to the effort as a member of the group.
Back to top
Back to top