Soccer - Maynooth edged out of CUFL Final on Penalties

Soccer - Maynooth edged out of CUFL Final on Penalties 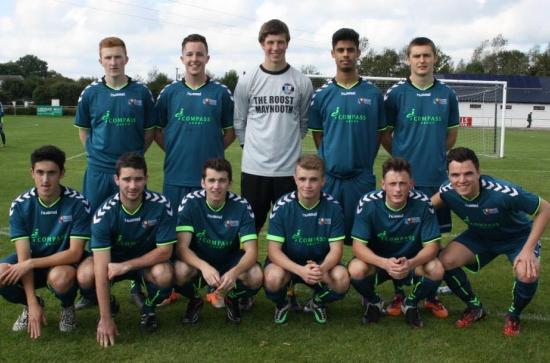 Maynooth University 0 UCD 0
AET UCD wining 6-5 on penalties
Maynooth University men senior squad reached the CUFL premier division final. On the way to the final they topped the group defeating DIT, Trinity, Sligo IT & DCU. They then progressed to the quarter final & faced a resilient Athlone IT squad. After a tough contest Maynooth overcame Athlone by a single goal. They then travelled to a neutral venue IT Carlow to take on Waterford IT. In a match were Maynooth dominated, it took a spectacular late finish by top scorer Muhanned Bukhatwa to separate the teams.
The final took place in Frank Cook Park Dublin at 7.30pm on Tuesday the 18th of February which featured Maynooth University & UCD. The early exchanges were dominated by UCD as Maynooth struggled to come to terms with the pace at which UCD approach the first half. However neither side created any clear cut chances the score was 0-0 at the break. Maynooth started the second half a much improved team & soon started to dictate proceedings. However with chances at a premium both side ran out level 0-0 as they had in the group game earlier in the season. Extra time mirrored the 90 minute finishing scoreless. The luck was with UCD on this occasion as they took the CUFL Premier title defeating Maynooth 6-5 on penalties.
Maynooth fresher secure CUFL Div 3 title
Maynooth 3 Waterford IT 1
Maynooth men fresher squad capped a very successful season by securing the CUFL division 3 title by defeating Waterford IT 3-1 at IT Carlow on Wednesday the 18th of February. This talented group of player topped their league group by overcoming DCU, RCOS, Dundalk IT & Athlone IT. They then defeated Cavan Inst of FE in the quarter final & Blanchardstown IT in the semi final. The final itself was dominated  by Maynooth as they deservedly ran out winners. Top scorer Malachy Spratt scored two & Eoin Bridgette scored the vital goals to bring the cup back to Maynooth