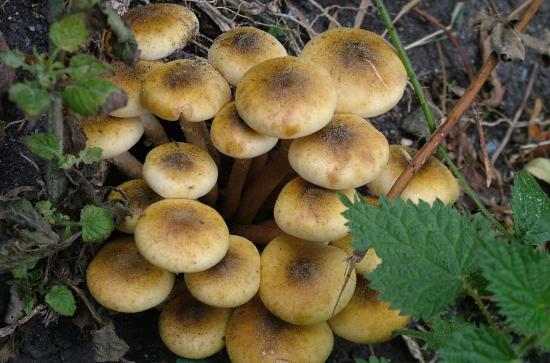 The blue whale may be the largest living animal on the planet but the world’s largest living organism is actually a mushroom, called Armillaria ostoyae. The largest known Armillaria specimen, discovered over twenty years ago in Oregon, USA, is thought to be thousands of years old and covers an area of over ten square kilometers. Armillaria species are amongst the most devastating fungal pathogens, causing root rot disease in more than 500 plant species, which may cause severe deforestation and impact on climate change. They are known as white rot fungi, meaning they are capable of breaking down all components of plant cell walls, a capability that also interests bioenergy researchers.

Now an international group of scientists including researchers from the Hungarian Academy of Sciences, the U.S. Department of Energy Joint Genome Institute (DOE JGI) and five researchers from the Department of Biology at Maynooth University (Dr. David Fitzpatrick & Professor Sean Doyle along with PhD students Nicola Moloney, Eoin O’Connor and Rose Waldron) have recently sequenced and analysed the complete genomes of four Armillaria species, published in Nature Ecology and Evolution (1), the team uncovered a number of genetic mechanisms that help Armillaria species develop their unusual rhizomorphs, shoestring-like structures that spread through soil in search of new food sources, to grow so big and get so good at killing host plants.

Aside from A. ostoyae, the team also sequenced and analyzed the genomes of A. cepistipes, A. gallica and A. solidipes. This genome work builds on earlier work (2) by Professor Doyle and Dr. Fitzpatrick who along with PhD student Cindy Collins and colleagues at the Wellcome Trust Sanger Institute sequenced the first Armillaria genome (A. mellea, the honey fungus) in 2013.

Using comparative genomics, transcriptomics and proteomic data generated from Science Foundation Ireland funded protein mass spectrometry facilities, the team generated information that suggests that the development of rhizomorphs have a lot in common with that of the fungal fruiting bodies (mushroom cap) indicating that rhizomorphs may be multicellular structures, a discovery of great interest to evolutionary mycologists.