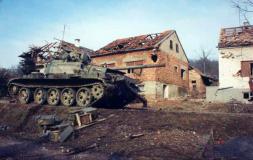 Opinion: recent right-wing attempts to spin facts about historical events are a worrying development in the country by Sven Milekic, Maynooth University Centre for European and Eurasian Studies.

In a post-truth world of fake news, alternative facts and widely spread conspiracy theories, history has become a logic target of revisionist wannabe historians. This applies for Second World War history and its devastating legacy of the Holocaust and other crimes.

This process has been amplified by a far-right surge and radicalisation of mainstream politics across the globe, spilling over to social networks and mainstream media. Although Holocaust denial and distortion has even made its way to Germany – a role model for dealing with the past – it is still hard to imagine that someone would downplay crimes committed in Auschwitz on a public TV broadcaster.

But such practice has taken place on the public broadcaster of EU’s youngest member-state, Croatia. As a nation forged in war in the 1990s and transiting from socialist Yugoslavia under the Communist Party to a multiparty democracy and market economy, Croatia is completely entangled in its past. While its wartime past still troubles relations with neighbouring Bosnia and Herzegovina and Serbia, the core interest of Croatian revisionists is the country’s second World War history and subsequent Yugoslav period.

Following the Axis invasion, the Kingdom of Yugoslavia capitulated in 1941 and the Croatian fascist Ustasha movement declared its Croatian Nazi puppet-state, based upon racist and discriminatory laws against Serbs, Jews and Roma. This resulted in complicity in the Holocaust, genocides and massive atrocities against these groups, as well as real and perceived political opponents. The Jasenovac concentration camp became the central place of Ustasha crimes, where 83,145 people were killed from 1941 to 1945.

While these historical events were the subject of extreme exaggeration during the 1980s in Yugoslavia, the first noticeable attempts to downplay the Ustasha crimes occurred with the 1989 book "Wastelands of Historical Reality" by Franjo Tuđman, who became the first president of Croatia in 1990. In his book, Tuđman downplayed Ustasha crimes and the overall death toll, while at the same time obscuring the suffering of Jews in the camp as well as the long established number of Holocaust victims in general. When Tuđman's book was published in English in 1996 as "Horrors of War", this problematic chapter was left out.

This historically problematic relation to Ustasha, who were partially seen as Croatian patriots fighting Yugoslav Communists and Serbs, continued throughout the 1990s before dying out with the subsequent liberal period of the 2000s. But with the growth of the far-right, historical revisionism has returned with a vengeance and is arguably more extreme than ever before.

Even mainstream media has opened its doors to historical revisionism. The national broadcaster, Croatian Radio-Television (HRT), which has shifted towards the right from 2016 onwards, had historian Igor Vukić as a guest on its popular daily TV show last May. He was talking about his book "Radni logor Jasenovac"("Jasenovac Labour Camp") that depicts Jasenovac as a mere labour camp. In the interview, he went so far as to say that children were never present in the camp and that Jews were only deported to Jasenovac to be saved from deportations to Nazi death camps, thus denying historically-supported figures of 20,101 children and 13,116 Jews killed in the camp.

Although the host of the show apologised about Vukić’s statements, HRT continued to promote his book. In October, another HRT show promoted "The Jasenovac Myth", a book by the controversial Roman Leljak which also downplays crimes committed in Jasenovac. While these are not the only such incidents on HRT, the situation across Croatia’s mainstream media scene is equally problematic. Three of the four most read daily newspapers – Večernji list, Jutarnji list and Slobodna Dalmacija – as well as some news sites embarked on a similar path of perverting historical facts.

With the growth of the far-right, historical revisionism is arguably more extreme than ever before

This editorial direction is down to a couple of factors. One is the wider shift of the Croatian political and media scene towards the right. In Croatia's case, it is also connected to the war of the 1990s, as Serbs, then as well as during the Second World War, were seen as the biggest enemies of the Croats. Thus, nationalists and even people from moderate circles feel the need to deny crimes against Serbs as it will, somehow, morally strengthen Serbia and Serbs. 23 years after its war of independence, Croatia is thus still moulding its own national identity, unfortunately partly based on a lie.

The other reason has to do with the overall deterioration of journalism as a profession, the lack of funds and growing political control. Media are trying to appease political figures, dumb down the readers and reap sales from cheap sensationalism and attracting readers leaning towards conspiracy theories. Many readers will be bored by complex presentations of historical events and want simple answers offered by quasi-experts. And the media provides them with this while helping certain groups to take control of society’s future.