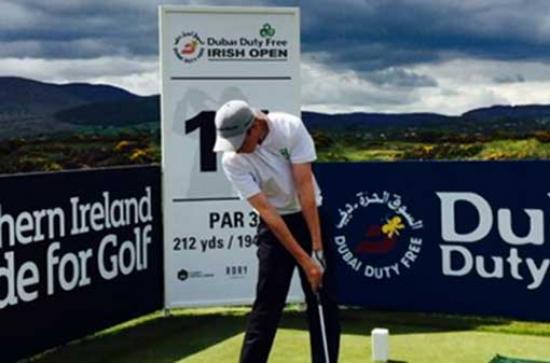 Gary Hurley at 2015 Irish Open
Maynooth University’s leading golf scholar Gary Hurley (3rd Year - Business & Management) will compete this week in the hugely anticipated Dubai Duty Free Irish Open at Royal County Down
The tournament is being hosted by the Rory Foundation and supported by Tourism Northern Ireland and is expected to boast a capacity crowd of more than 80,000 spectators at the Newcastle venue. The involvement of World number one, Rory McIlroy has attracted some of the greatest names in global golf which includes; Ernie Els, Rickie Fowler, Sergio Garcia, Martin Kaymer, Lee Westwood, Luke Donald as well as home-grown stars, Padraig Harrington, Shane Lowry and Graeme McDowell.

Hurley is one of four top amateurs to receive an invitation from the Golfing Union of Ireland for the Irish Open. Hurley's consistency on the international amateur scene over the past year has catapulted him inside the top 40 elite of the World Amateur Golf Rankings and has established him as one of Ireland’s top players.

In 2014, he was a model of consistency with six top five finishes in major international amateur events highlighted with tied second in the European Individual Amateur, 3rd at the Lytham Trophy and 5th at the Brabazon Trophy.  These performances earned him a place on the Great Britain and Ireland (GB&I) team to face Europe in the St. Andrews Trophy. He also helped Ireland to second place at the European Team Championships’,11th in the World Amateur Team Championships and won all four of his matches on route to Ireland winning the Home Internationals.  These results justified selection for the 20-man shortlist for the GB&I Walker Cup side.

In 2015 to date, Hurley has notched up six top ten finishes in nine events worldwide which includes; 3rd at R&A Bursary Tournament, Runner-Up Spanish Amateur and 3rd -Southern Cross Invitational in Argentina. Hurley’s performances has led to his second cap for the European Palmer Cup team to face the USA in the annual Ryder Cup style match which takes place next month in the US.

Hurley will make his second appearance in the event having made the cut at last year’s Irish Open Fota Island on his debut highlighted by a magnificent second round of 66. This year’s event offers a unique experience to compete against the best players in the world and will be another vital learning experience for Hurley as he plans to enter the professional ranks next September on graduating from Maynooth University with a BBS in Business & Management. The Irish Open also offers Hurley the opportunity to touch shoulders with fellow two of the University’s honorary conferees in Padraig Harrington and Paul McGinley who were honored at the launch of the Paddy Harrington Golf Scholarship programme in 2006.

The University wishes Gary the greatest success this week in his second Irish Open. He will tee off at 14:20 on Thursday and 09:20 off the 1st tee on Friday May 29th.