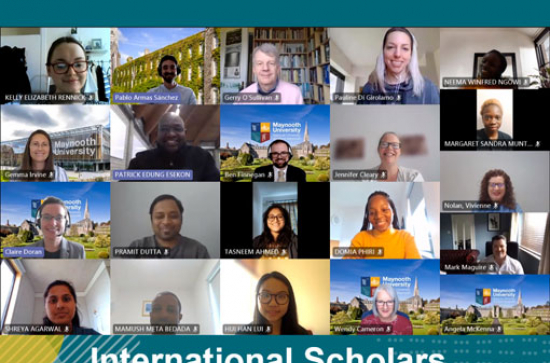 Maynooth University Director of Internationalisation, Claire Doran, opened this year's International Students' Recognition Ceremony, accompanied by other members of the International office, which was conducted this year via Teams to respect the current health and safety guidelines.

The ceremony was an opportunity to celebrate and mark the excellent achievements undertaken by the Scholars. Claire Doran expressed her gratitude to the Scholars "for the contribution they have made to the University to date – academically, socially and culturally" and wished them every success in their chosen fields.

Creating opportunities for talented international students to study at MU is one of the university’s strategic objectives. Some of the scholarships featured at the ceremony are offered by MU itself, made possible thanks to the endeavours by the MU Graduate Studies Office and various academic departments within the university. Other scholarships are offered externally by organisations such as the Department of Foreign Affairs & Trade, Education in Ireland, the Higher Education Authority, and Science Foundation Ireland. Representatives from these organisations were also present at the ceremony.

Also addressing and welcoming the Scholars was Dr. Gemma Irvine, Vice President for Equality and Diversity at Maynooth University, who underlined “the benefits of travel, meeting new people and experiencing new cultures and languages, as well as the benefits of being able to showcase one's own culture/language and traditions while abroad”. The Office of the Vice President for Equality and Diversity works closely with the International office by taking an holistic approach to empower everyone to embed equality and inclusion in all aspects of scholarships and teaching offered at Maynooth University.

Having international Scholars study at Maynooth University greatly enriches diversity, which was highlighted as being "the spirit of a university, where we deliberately come together, with our different backgrounds, perspectives and hopes to challenge our thinking and to innovate".

The ceremony was also addressed by outgoing President of Maynooth Students’ Union Kelly Rennick, followed by the announcements of the international Scholars, concluded by communal applause and a 'must-have' group photo!