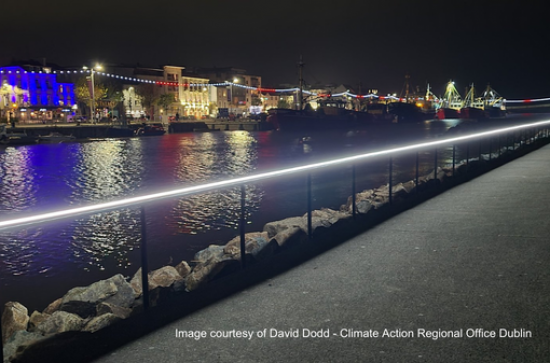 The most recent art installation in Wexford town (pictured) launched on Friday, follows a similar event in the Claddagh, Galway, with more planned in coming months. In February 2014, Wexford town was flooded following Storm Darwin. The line of light indicated by the Línte na Farraige installation at Commodore John Barry Monument, Ballast Bank and Wexford Town Promenade, indicates the predicted rise in sea levels in a similar storm surge in 2150 when sea levels have risen by 1 metre — a moderate climate change scenario.

Línte na Farraige is a collaborative project inspired by the light installations of Finnish artists Timo Aho and Pekka Niittyvirta. This art and science collaboration involves climate scientists from Maynooth University and Trinity College Dublin, the Climate Action Regional Offices (CAROs) and Local Authorities, as well as designers from Algorithm and Native Events.

The coastal installations are based on emissions scenarios from Irish tide gauge data and the recently published Intergovernmental Panel on Climate Change (IPCC) Assessment Report 6 (AR6).

Línte na Farraige is a recipient of the inaugural Creative Climate Action fund, an initiative from the Creative Ireland Programme in collaboration with the Department of the Environment, Climate and Communications.

Solar panels and renewably powered battery packs are used as part of the installation to power the lights, which will only turn on twice per day during a rising tide.

Outlining the goal of Línte na Farraige the one of the scientists involved in the project, Maeve Upton, Department of Geography, Maynooth University, commented:

"We hope to shine a light on the risks of rising sea levels and storm surges by selecting a number of Irish locations to connect with a diverse array of communities. Our project aims to spark discussion around future sea level rise, emphasising the need to reduce our greenhouse gas emissions and inspiring Irish communities that the future is still in our hands."

"Línte na Farraige is a collaborative project which seeks to bridge the gap between the scientific community, the artistic realm and government bodies at a local and national level. In doing so, the project demonstrates to the general public the importance of the collective in mitigating climate change and future sea level rise."

Sea level rise predictions used in this project are largely based on data in IPCC AR6, which was released in August 2021. These data predict a global sea level rise of between 0.28 and 1.01 m depending on the emissions scenario (low to very high respectively) by the end of the century.