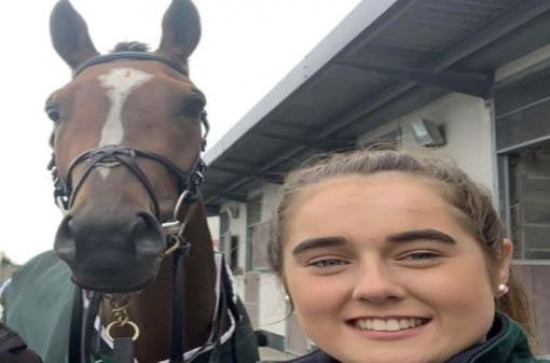 Students were asked to address, in no more than 500 words, the question of what racing administrators in the European and Mediterranean region might do to encourage greater participation in racing among young adults and, in particular, students.  Among Ciara’s ideas was the linking of student racedays to stable visits in the days leading up to the raceday, providing the chance to see one or more of the entries in person and up close before cheering them on from the stands.

Ciara is from a racing background, being the daughter of ex-jockey and trainer John Dineen. She currently rides out at John Joseph Murphy’s yard at Inishannon, County Cork.

Ciara wins an expenses-paid trip to the EMHF’s General Assembly, which it is hoped will be staged as an in-person event in Warsaw, Poland. She will attend the meeting and surrounding social functions, and present her ideas to the racing administrators in attendance.

Dr Paull Khan, EMHF Secretary-General, said: "My colleagues and I on the judging panel were delighted to award the Observer Fellowship to Ciara, whose views on attracting students to racing will, I am sure, lead to much discussion at our General Assembly."  Robert Riley Dargan, Founder and Chairman of the ESHF, commented: "We are delighted with the standard of entries and the enthusiasm students showed in wanting to contribute to the Industry. Congratulations to Ciara on her winning idea and thank you to both Paull and the EMHF for providing such an amazing opportunity to the members of the ESHF."

Ciara Dineen, competition winner, added: "I was thrilled and honoured to win the fellowship observer competition. This is a once in a lifetime opportunity for me, to attend and present at the EMHF annual general assembly. I am excited to develop my ideas further and hopefully get the chance to make them happen."