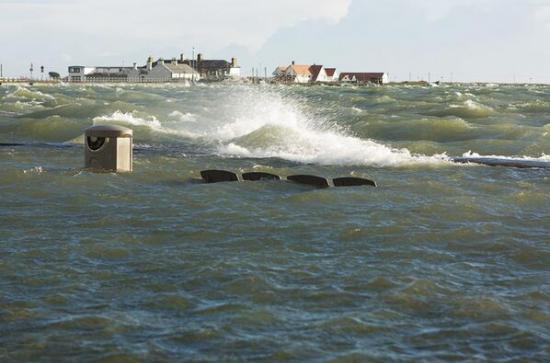 An international collaborative study led by Nanyang Technological University, Singapore (NTU Singapore) found that the global mean sea-level rise could exceed 1 metre by 2100 and 5 metres by 2300 if global targets on emissions are not achieved.
Maynooth University Assistant Professor Dr Niamh Cahill, in the Department of Mathematics and Statistics, collaborated on the study which used projections by more than 100 international experts for the global mean sea-level changes under two climate scenarios – low and high emissions. By surveying a wide range of leaders in the field, the study offers broader assurance about its projections for the ranges of future sea-level rise.
In a scenario where global warming is limited to 2 degree Celsius above pre-industrial levels, the experts estimated a rise of 0.5 metres by 2100 and 0.5 to 2 metres by 2300. In a high-emissions scenario with 4.5 degree Celsius of warming, the experts estimated a larger rise of 0.6 to 1.3 metres by 2100 and 1.7 to 5.6 metres by 2300.
“This international study is based on the informed opinions of 106 sea-level experts and underlines the critical importance of pursuing a low emissions policy to limit sea-level rise,” Dr Niamh Cahill said.
Professor Benjamin Horton, Acting Chair of NTU’s Asian School of the Environment, who led the survey, said that sea-level rise projections and knowledge of their uncertainties are vital to make informed mitigation and adaptation decisions.
Prof Horton said: “The complexity of sea-level projections, and the sheer amount of relevant scientific publications, make it difficult for policymakers to get an overview of the state of the science. To obtain this overview, it is useful to survey leading experts on the expected sea-level rise, which provides a broader picture of future scenarios and informs policymakers so they can prepare necessary measures.”
Published in Nature Partner Journals Climate and Atmospheric Science on 8 May, the projections of sea-level rise exceed previous estimates by the International Panel on Climate Change (IPCC)1.
The NTU-led international study was a collaboration with researchers from The University of Hong Kong, Maynooth University (Ireland), Durham University (UK), Rowan University (USA), Tufts University (USA), and the Potsdam Institute for Climate Impact Research (Germany).
“We know that the planet will see additional sea-level rise in the future,” says co-author Dr Andra Garner, Assistant Professor of Environmental Science at Rowan University in the United States of America. “But there are stark differences in the amount of sea-level rise experts project for low emissions compared to high emissions. This provides a great deal of hope for the future, as well as a strong motivation to act now to avoid the more severe impacts of rising sea levels.”
The 106 experts who participated in the survey were chosen as they were among the most active publishers of scientific sea-level studies (at least six published papers in peer-reviewed journals since 2014) identified from a leading publication database.
In response to open-ended questions, the climate change experts identified the Greenland and Antarctic Ice Sheets as the greatest sources of uncertainty. These ice sheets are an important indicator of climate change and driver of sea-level rise. Satellite-based measurements show the ice sheets are melting at an accelerating rate. However, the experts also noted that the magnitude and impact of sea-level rise can be limited by successfully reducing emissions.
Dr Andrea Dutton, Professor in the Department of Geoscience at the University of Wisconsin-Madison, who is not involved in this study, says, “One of the key take-aways from this study is that our actions today can make a profound difference in how much our coastlines will retreat in the future. That knowledge is empowering because it means that we can choose a better outcome through our actions.”
The paper, “Estimating global mean sea-level rise and its uncertainties by 2100 and 2300 from an expert survey”, was published in Nature Partner Journals Climate and Atmospheric Science on Friday, 8 May 2020.