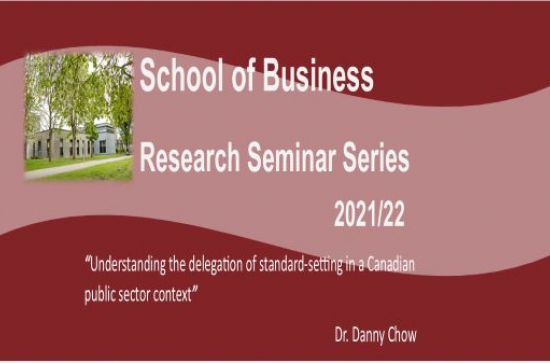 Join us for our next Research Seminar with Dr Danny Chow, Assistant Professor School of Business Maynooth University
RSVP to business@mu.ie

Abstract
Building on prior work exploring why nation states delegate regulatory authority to private agents, we seek to understand delegation further by exploring how the Canadian Public Sector Accounting Standards Board (PSAB) engages with its stakeholders in the process of setting accounting standards. There is a uniqueness about this Canadian case – our study explores the extent to which a private standard-setter without a formal legislative mandate is able to operate as a de facto regulator for the public sector. We examine PSAB’s entity level reporting project (2009-2014), in which new standards were proposed for related-party transactions and for appropriations. The documentary-based analysis of PSAB’s due process considers the dynamic effects of constituent participation, the negotiation of issues, and the revision of proposals. The findings illuminate different mechanisms that underpin delegation in the public sector, which are largely driven by legitimacy concerns. Due to significant power differences between the government and the private standard-setter, a newly proposed standard requires significant political support across different stakeholders with moral legitimacy facilitating its success. Proposals that appear to encroach on the government’s constitutional freedoms are at risk of being repelled by arguments based on sovereignty.

About the Speaker
Danny's current research interests are in the interface between accounting, public sector management, organization and regulation. Before moving to Ireland, he was based at various British universities (employed at: York, Durham, Birkbeck and Manchester; graduated from: Leeds, Cambridge). He is also a Fellow of the Higher Education Academy. Outside of School of Business, Maynooth University, he sits on the editorial board of the Journal of Public Budgeting, Accounting and Financial Management, is a chief examiner at the University of London, is a member of ACCA’s Public Sector Global Forum and is an external examiner for the Institute of Banking (Ireland).