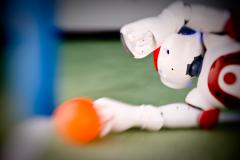 With self driving cars, artificial assistants for independent living, and rescue robots moving out of the laboratory and into the real world, we are on the cusp of a golden age in autonomous robotics. Unlike their predecessors, autonomous robots operate without needing human intervention or remote control and hence must be able to sense, think, and act by themselves.

Researchers from the Department of Electronic Engineering and Department of Computer Science at Maynooth University are playing their part, developing new techniques and solutions in visual sensing, perception, cognition, communication, and cooperation for autonomous robots.

To continue the advance of this fast moving field, we need to continually develop a strong pool of talented researchers, explains Dr Rudi Villing, lecturer in Electronic Engineering at Maynooth University. That is one of the motivations for RoboCup, an international grand challenge designed to advance the state of autonomous robotics into the middle of the 21st century. RoboCup features competitions in soccer, search and rescue, and the home environment and each competition drives progress in specific aspects of the autonomous robotics field.

While kicking a ball, passing to a team mate, and scoring a goal are abilities that many of us take for granted, there’s a lot more to it than you might imagine. Maynooth University team RoboEireann, developed by an interdisciplinary team of students and staff, has first hand experience of this, having competed in RoboCup soccer since 2008.

Robot soccer is played by teams of 5 half-metre high robots, each comprising a goalie and 4 outfield players. There are human referees and just like real soccer there is a kick-off, goals, fouls, and penalty kicks. Because no human input is allowed, the challenge for these robot players is to gather and process information by themselves and then communicate and cooperate with their team mates to outperform their opponents, explains Dr Villing. “We need to provide the robots with both the basic skills like walking, balancing, diving saves, and kicking and the higher faculties like cognition, planning, and cooperative behaviour by developing software to run on the robot’s head computer.”

Dr John McDonald, lecturer in Computer Science at Maynooth University, continues “one of the most difficult problems is developing the perceptual capabilities that allow the robots to know what is where on the pitch. Such capabilities provide the raw material for deciding what to do next, whether it is to take a shot or make that critical diving save.”

A pair of cameras in each robot’s head provides a constant stream of images of its surroundings. From these images a multi-stage processing pipeline starts by first attempting to attribute a set of low-level labels to every pixel in every frame. These low-level labels are then fed into further stages of processing, where each stage tries to build a more and more complete model of the robot’s environment. Dr McDonald is quick to point out that “what makes the setting particularly challenging is that it’s not enough to just get the correct answer, you have to do this quickly, since figuring out what was where 5 seconds after the fact isn’t much use in such a dynamic environment.”

It’s not only the robots who must work together. To create software as complex as this, a team of developers who can work to high standards and work together quickly and effectively is needed to get the job done. “In the academic environment, where much of the assessment focuses on individuals, this project provides a real opportunity for students to prove their real-world skills in team work, collaborative problem solving, and large project development,” notes Dr Villing.

The techniques learned and solutions developed in the course of RoboCup soccer have many applications in the wider world of autonomous robotics. Novel solutions to balance, walking, and motion planning are directly useful to all humanoid robots, whether in rescue situations or in the independent living environment. For humans, our perception is the thing that connects us to our world. Providing robots and other devices with similar capabilities will result in systems that can sense, react, learn and  understand their environment. Finally, advances in cognition and cooperative behaviour will help drive the key feature of all autonomous systems, namely their autonomy.

The RoboCup project provides an excellent opportunity for students to create novel solutions to problems in autonomous robotics while also developing the skills necessary for complex system development and a career start in autonomous systems.

RoboEireann were runners up in the RoboCup German Open 2012 and quarter finalists in the RoboCup 2013 world championship, and as such gives students the chance to prove their abilities at the highest international level. The RoboEireann team also engages in outreach activities, presenting the application of science, technology, engineering and mathematics to robotics in a fascinating and fun way that is highly accessible to a broad audience including the children who will become the engineers and scientists of the future.