Abstract:
In the articulation of my own thinking two striking and compact expressions of Augustine have had an impact on me from the beginning, and continued to do so in often unconscious ways. The first is when he describes the character of his own itinerary and thought in the following terms as a double movement: Ab exterioribus ad interiora, ab inferioribus ad superiora – from the exterior to the interior, from the inferior to the superior (Enarratio in Psalmum, 145).  The second is when Augustine speaks of God as interior intimo meo et superior summum meum – more interior to me than my most intimate intimacy and superior to my highest summit (Confessions, III, vi). I want to elucidate some of the central themes of my work, The Intimate Universal, in the light of these two turnings in thought. Among the issues addressed: the nature of the (modern) turn to self, and how it both like and unlike to the turn to the “interior” understood in light of the intimate universal;   how to address the move to the “superior” and complications in this move if we prioritize human autonomy; the enigmas of intimacy, and the deeper enigma of intimacy raised to a second degree, if the divine as more interior to even what is said to be most intimate to our own being.
The approach I take in all his is what I call the companioning approach. In the companioning approach a particular thinker, such as Augustine, is a source of inspiration and challenge, not always explicitly acknowledged as such, but of influence perhaps at a more intimate level, providing something like a secret touchstone, in relation to intellectual and spiritual excellence. 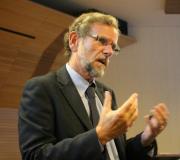 William Desmond is David Cook Chair in Philosophy at Villanova University, and Professor of Philosophy Emeritus at the Institute of Philosophy, Katholieke Universiteit Leuven. His work is primarily in metaphysics, ethics, aesthetics and the philosophy of religion. He is the author of many books, including the ground-breaking trilogy Being and the Between (1995), Ethics and the Between (2001), and God and the Between (2008). Being and the Between was winner of both the prestigious Prix Cardinal Mercier and the J.N. Findlay Award for best book in metaphysics. Other books include Art and the Absolute (1986); Desire Dialectic and Otherness: An Essay on Origins (1987); Philosophy and Its Others: Ways of Being and Mind (1990); Beyond Hegel and Dialectic (1992); Perplexity and Ultimacy (1995); Hegel’s God (2003); Art, Origins, Otherness: Between Art and Philosophy also in (2003); as well as Is There a Sabbath for Thought?: Between Religion and Philosophy (2005).  He has also edited five books and published more than 100 articles and book chapters. His book The Intimate Strangeness of Being: Metaphysics after Dialectic appeared in 2012, the same year in which the William Desmond Reader also appeared. His most recent book, The Intimate Universal: The Hidden Porosity among Religion, Art, Philosophy and Politics appeared with Columbia University Press 2016. Among the Visiting chairs he has held are the J.N. Findlay Chair at Boston University, the Gadamer Chair at Boston College, and the O’Malley Chair at Loyola Marymount University. He is Past President of the Hegel Society of America, the Metaphysical Society of America, and the American Catholic Philosophical Association.
Back to top