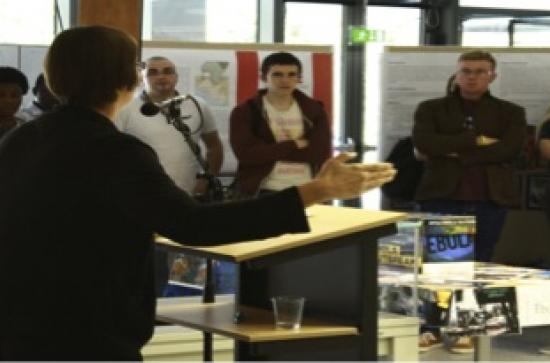 The Department of Applied Social Studies and the Maynooth University Library collaborate with the Liberia Solidarity Group and Sierra Leone Ireland Partnership to raise awareness about Ebola and support those struggling to address it in West Africa.

As the havoc caused by Ebola in West Africa increases, Maynooth University Library hosted a timely Lunchtime Briefing providing information on the virus, its effects and possible treatments, as well as hearing about the ripple effects of this medical crisis in countries such as Sierra Leone and Liberia, where existing infrastructure simply cannot deal with demands now being placed on it.

Providing details about the nature, transfer and treatment of Ebola, immunologist Dr. Martina Schroder emphasised the importance of clear information and basic protective gear in stemming the rate of infection and, importantly, reducing panic among the population in West Africa.

Jacinta Fay (LSG), returned recently from Liberia. Highlighting existing disconnects between government services and the general population, she called for on-going support and solidarity with civil society in Liberia and the need for financial and practical assistance from the international community is channelled to and through local organisations with trust and expertise among local communities.

Joe Manning, Honorary Consul of Sierra Leone to Ireland, noted the ongoing efforts of Irish Aid in West Africa, including the efforts of our Ambassador Sinead Walsh to Sierra Leone & Liberia. He stressed the importance of the Irish government maintaining and increasing this support as necessary, acknowledging the impact of this current crisis on the long term security and stability of these countries and their West African neighbours.

Describing her fears for family and friends, and the daily routine of phone calls home to check on the situation there, Irina Chayee, a Liberian woman studying at the Department of Applied Social Studies reminded all present the human reality of the Ebola Crisis.

For more information about the evolving situation in Liberia and Sierra Leone, please check: www.liberiasolidarity.ie
Donations, which will go directly to support the work of local organisations struggling to break the chain of infection and the efforts of medical teams without essential equipment can be made to:
Liberia Solidarity Group Account, Bank of Ireland, Maynooth
IBAN number: IE29 BOFI 9015 0396 7092 67
BIC number: BOFIIE2D