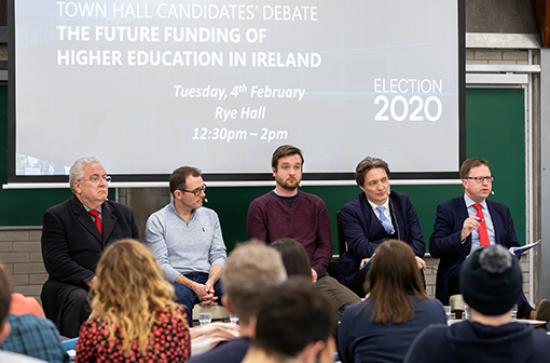 Candidates debated the crisis in third level funding and responded to audience questions across a range of policy issues, including how their parties would address a 40% drop in state funding per student over the past decade.

Welcoming the candidates to campus, Prof Philip Nolan, President of Maynooth University, said: “The Irish third level education system, which has been the driver of this nation’s economic success and resilience for decades, has reached a crisis point. Student enrolment across the university grew by 21,000 students between 2008 and 2018. Here at Maynooth University, we accounted for 22% of that growth.”

Prof Nolan said: “The funding shortfall is now at a critical juncture. There is a real risk that the quality of our higher education system, already showing signs of strain as represented by a fall in international rankings, will be seriously damaged. If we allow that to happen, it could take years, even decades, to recover the lost ground.”