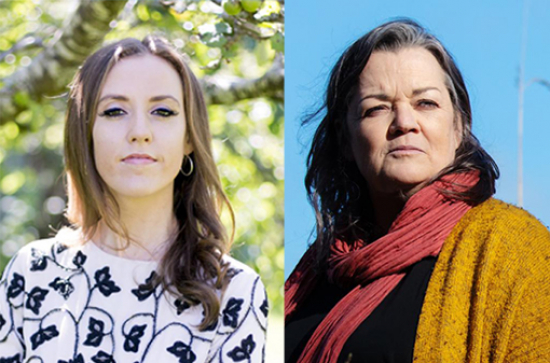 Novelists Louise O’Neill and Louise Kennedy in conversation with Dr Sinéad Kennedy. Two of the most exciting writers in Ireland discussing their novels, their writing processes and reading from their work.

Louise O'Neill grew up in Clonakilty, a small town in West Cork, Ireland. Her first novel, Only Ever Yours, was released in 2014. Only Ever Yours went on to win the Sunday Independent Newcomer of the Year at the 2014 Bord Gáis Energy Irish Book Awards; the Children’s Books Ireland Eilís Dillon Award for a First Children’s Book; and The Bookseller‘s inaugural YA Book Prize 2015.
Louise’s second novel, Asking For It, was published in September 2015 to widespread critical acclaim. She went on to win the Specsaver’s Senior Children’s Book of the Year at the 2015 Irish Book Awards, the Literature Prize at Irish Tatler’s Women of the Year Awards, and the American Library Association's Michael L. Printz award. Asking For It was voted Book of the Year at the Irish Books Awards 2015 and spent 52 consecutive weeks in the Irish top 10 bestseller list. The New York Times called it "riveting and essential" and The Guardian named O'Neill "the best YA fiction writer alive today."
O'Neill's second novel for adults, After the Silence, was published in September 2020 and spent six weeks in the top three of the Irish book charts.
Louise O’Neill is currently Arts Council Writer-in-Residence at Maynooth University.

Louise Kennedy grew up in Holywood, Co. Down. Her short stories have been published in journals including The Stinging Fly, The Tangerine, The Lonely Crowd and Banshee.
Kennedy’s short story collection The End of the World is a Cul de Sac (Bloomsbury), an “outstanding debut” (The Irish Times) was described in The Guardian as “salty, wise, droll and keen to share the lessons of a lifetime”. Her recently published first novel, Trespasses, has already been acclaimed in The Spectator, The Irish Times, and The Guardian, which described it as “masterly”.