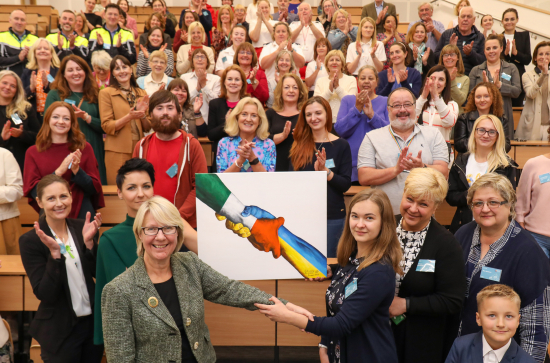 During the event, 16-year-old artist Oleksandra Atamanenko, a Ukrainian visitor from Kyiv, presented the University with her painting, titled ‘Hands’, to mark the occasion and symbolise the special relationship between the Ukrainian residents and university.

Held at the recently opened Maynooth University Technology, Society and Innovation (TSI)
Building, the event paid tribute to the collective efforts of national and regional organisations who provided much-needed supports to some 1,200 Ukrainian guests who stayed over the summer months.

The Maynooth Ukrainian Action Group facilitated the expert work of professional agencies in working with families fleeing the war-torn country, while national and regional organisations stepped up to provide supports to families and children throughout their stay.

Speaking at the event, President of Maynooth University Professor Eeva Leinonen, paid tribute to the many organisations and volunteers who responded to the call to provide supports and services to Ukrainian guests accommodated at the University.

“I want to pay tribute to the collective work of all the organisations, agencies and volunteers who worked night and day to respond to the needs of our Ukrainian guests, who were forced to flee their country in the most terrible circumstances.”

“It was absolutely critical that the relevant agencies and organisation were facilitated and enabled to do their jobs in a strategic manner. This was accomplished through the combined efforts of the community and professionals in the Maynooth Ukrainian Action Group.”

The range of professional services and voluntary supports at Maynooth included a Ukrainian Information Centre staffed by Ukrainian speakers, medical, welfare and legal information clinics hosted by the Irish Red Cross, sports, activities and English language classes on campus and in Maynooth Town coordinated by Kildare County Council in June, and the Kildare LEADER Partnership in August. On 24th August, Ukraine Independence Day, the University also hosted a family event organised by the Kildare LEADER Partnership.
Additionally, Maynooth University was asked to host the National Student & Researcher (NSR) Helpdesk on behalf of the higher education sector, to support people displaced from Ukraine who would like to apply and continue their higher education studies or research in Ireland.

Dr Gemma Irvine, who chaired the Maynooth Ukrainian Action Group, said: “ This is an excellent example of a university working hand in glove with its community to better serve society. The multi-agency approach adopted here, and subsequent learnings, will form the basis of a new Ukrainian Kildare Network which is being set up to coordinate supports for displaced Ukrainians living in Kildare.”