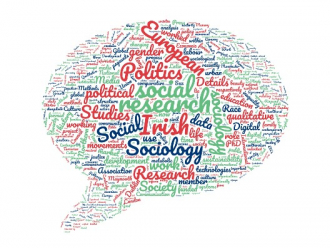 Welcome to the research home page of the Department of Sociology and Centre for the Study of Politics, a gateway to the research underway in the department. We provide world-class leading research that impacts on both a micro and macro level, and aids in developing policy-making decisions both nationally and globally. Our research combines theoretical concerns and critique with sustained empirical research, that speaks to issues of public concern. We are committed to directly engaging with the transformations in contemporary Irish and global society, and politics.
Our research covers a wide range of intellectual areas including but not limited to:
Read more in the University Research Reports. Click on the tabs below to learn more about our research themes, clusters, projects, contributions and affiliations.

At Maynooth Sociology & Politics, we collaborate both nationally and globally. Staff in the department are involved in a range of national and international networks and conferences, and major decision-making bodies. The map below illustrates the global ties of our current staff in terms of where they have studied, carried out research, their research and teaching partners, and connections: 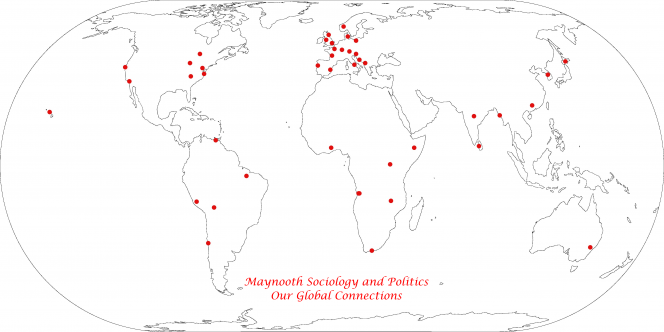 We work closely with different national and international research grant and funding agencies, some of which include: 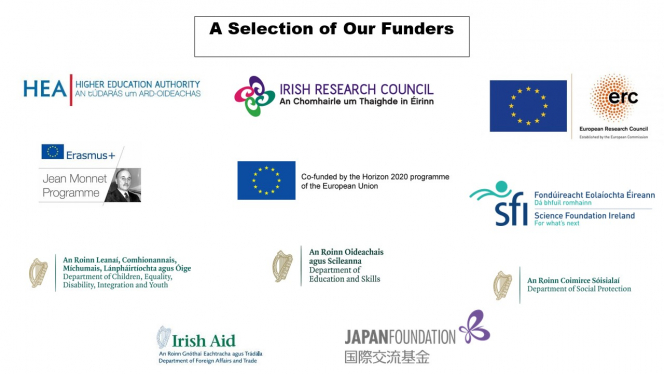 The primary aim of this research cluster is to subject existing configurations of power to critical questioning, and to explore the roles of radical theory and social activism in generating alternative futures based on such principles as equality, direct democracy, autonomy and social and environmental justice. In keeping with the spirit that animated its creation, this research cluster is decidedly activist-oriented. All of the members of the research cluster are students of social activism in one form or another, and our varied understandings of the means and ends of social change are informed by our practical participation in a wide range of campaigns and social movements. At the same time, we regard ourselves as critical intellectuals faced with the frequently contradictory tasks of pursuing the truth, joining truth to power and opposing truth to power.

While the members of the research cluster approach the subject matter from a wide range of political perspectives, we are united by our common desire to promote free and critical thinking that is linked to democratic social movements and points towards an alternative social order. Research themes of particular interest to cluster members include contemporary anti-capitalism and the global justice movement, anarchism and the politics of utopia, Marxism, feminism, green localism, sexual politics and the politics of masculinity, critical pedagogy and popular education, counter-cultures, working-class studies, political violence, class and gender politics in contemporary Northern Ireland, and post-Celtic Tiger Ireland.

This research cluster is interested in how the process of globalisation manifests itself transnationally, locally and regionally in terms of identity formation, political institutions and cultures.  The group is united in their interest in exploring how identities (gender, ethnicity, race, religion, class and sexuality), communities and cultural practices (from popular culture and the global media industry to everyday lived experiences and practices) and institutions (local, national, supranational) are shaped by global processes and geo-political shifts.

Members of the group have research interests in cultures and counter cultures, mass and new media, the culture and politics of love, representation and performance, multiculturalism and migration, social cohesion and social conflict, commodification, consumerism, coalition building, collective identity, racialisation, social and political mobilisation, religion and social change, and the relationship between state identity and interests within EU and global contexts. These interests are explored in everyday and virtual environments and local, regional, national and transnational contexts. Members are also engaged in and committed to exploring the policy and political implications of their research.

The group would welcome staff and postgraduate members from other departments and disciplines with an interest in these topics and who are willing to engage in seminar discussions, reading groups, writing workshops and potential collaboration on research projects.

This research cluster is concerned with how social change unfolds across different countries and geographical spaces. Its members are brought together by a common interest in understanding social change through the comparative historical study of such things as rural economic organisation, religious belief systems, modern households and families, political economy, social movements, and European enlargement processes, as well as discussing the methodological satisfactions and challenges of doing comparative/historical research

The primary aim of this research cluster is to explore the relationship between political economy, work and working lives, and social inequalities. Our research is rooted in a variety of theoretical perspectives but begins from a recognition of: the social embeddedness of market structures and action; the importance of social relations and social institutions in work, welfare and organisations; and the critical significance of processes of power and inequality as fundamental elements of economic life. Members of this research group are involved in a range of events, discussions and research seminars.

Key themes include: Changing Nature of Work, Institutions, Welfare and Labour Markets, and Dynamics of Inequality.

Our research goals are to integrate empirical engagement with everyday life in urban, rural and suburban contexts with contemporary theoretical debates in the humanities and social sciences. One of the strengths of this research cluster is that our work lies at the intersection of a broad church of disciplines including art, planning, architecture and photography.  Our aim is to build bridges to these disciplines and extend the reach of our sociological work on (sub) urban processes and practices.

Department members founded the Irish Journal of Sociology and have played key roles in the Sociological Association of Ireland over the years.

Over the past decade, we have built upon these early contributions to develop research activity within the department and to play a central role in the development of national research institutes and infrastructure, during a period that is likely to prove historically pivotal in shaping the Irish research system.

In addition, staff are active in a wide range of international associations and networks.