Anastasia Crickley reflects on a recent visit to Hong Kong 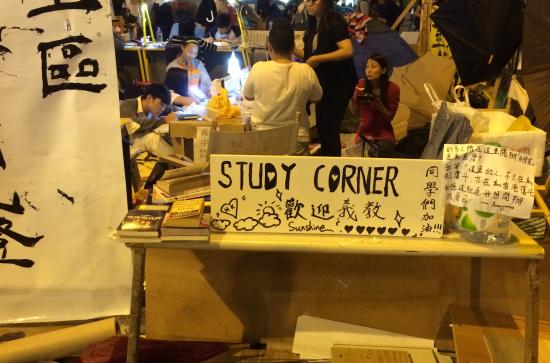 On Tuesday night last the police beat up a social(community) worker one of the Yellow Movement leaders at Mongkok. This is the second Occupy site where protesters sat peacefully on the road and had set up makeshift places of worship-Christian at one end of paper and bamboo barricades which stretched 100yards along the main road and Buddhist at the other. His six minute beating by seven policemen as he lay on the ground was captured on video and soon went viral.

On Wed night I stood outside Admiralty Police station with social workers and community workers, academics, and students of social and community work demanding justice for their colleague. Opposite and behind us were lines of policemen in riot gear armed with truncheons, pepper spray and more. Others stood at exits to the left and right and busloads waited at the end of the street.
Eventually the police agreed that protesters could go into the station five by five to register their complaint about the beating. As they waited, some until 5am, there were speeches, some polite chanting, and resolute determination including from a number I spoke to who had not been previously involved to stand by their colleague and to continue to demand democracy. Once this process was underway my community work friends passed on their megaphones and we sat down to talk.

They spoke of their commitment to inclusive thought out strategies, step by step goals without violence, acknowledged the risks involved and the unknown nature of government intentions. We shared the reality that commitment to justice cant be a 9-5 occupation. I explained the success of their global communications in spite of some commentators, expressed my solidarity and they were back to the barricades-for how long no one could say.
Earlier on Tues night I made the short walk from Admiralty MTR (underground station) through walls festooned with posters and post-its calling for participation and democracy to the main Occupy site outside the Leglislative Council building. Before me was a protest unlike any other I have seen including the Wall St Occupy movement protest.
Tents stretched to the left and right, first aid tents also. Umbrellas were much in evidence, students-including high school pupils worked diligently in the homework sections, food was dispensed from another stall, and speakers including a priest made short interventions at various junctures to small groups of listeners. People stay all night and all I spoke to intend to stay until change is underway or achieved.
The atmosphere is polite, positive and resonating with an infectious emotion of determination and commitment. I told my friend that I could make my own way to the hotel so she could get home to her baby, she informed me that her baby's future depended on this so she was going back to the protest. She assured me also of women's voices being heard although not well represented in the visible leadership.

Early Friday morning the police removed the Mong Kok barriers. The protesters didn’t stop them but later came back again, this time without the flimsy protection of the bamboos and paper, which the barriers were made of. Coins were dropped on the road to slow traffic down enough to sit there again in some sort of safety. By Friday night the police were out in big numbers with sirens screaming throughout the city and pepper spray and noise weapons. The protesters, not an exceptionally large group, defended themselves with the now customary umbrellas and cling film and this afternoon still tenuously hold their ground.

Meanwhile numbers at the Admiralty tent city have swollen hugely, responding to these heavy-handed police tactics. Also it's the weekend when people may have some time off from their exceptionally long working days. The posters and umbrella art grow too.  It would take a lot of tear gas to dismantle this gathering.  The leaders however recognise that after three weeks of disruption, time is not on their side. They pursue talks in spite of healthy scepticism about the govt's intentions.

Academics say that contrary to government pronouncements they can submit reports to Beijing on the situation in Hong Kong at anytime. The Chief Executive sticks to his line that the Beijing decision which ruled out public nomination for the 2017 chief executive election must stand. Democratic elections, in line with the 1997 agreement with the British which guaranteed no change in procedures for 50 years, are the first demand of the protesters.

Mobile phones and technology I know little about are key tools both for organising and for early warning about police action with updates posted regularly various apps. The people involved and leaders I met are not naïve and know the mountain they try to climb.  There are of course different views among and between them and the left wing political parties also involved.
This protest is different as I already said.  The emotions however and determination are reminiscent of those I witnessed at the PeoplePower demonstrations of January 1986 in Manila just one month before the dictator Marcos fell. This is also Asia I know so similarities are inevitable. I am reminded too that Marcos' fall brought only temporary respite to the people of the Philippines and such an outcome is not even considered here...yet faith in a positive outcome remains fast.

I salute these activists who continue to analyse and hope their actions bear at least some of the fruit they work so hard for.
Anastasia Crickley Hong Kong, Sat October 18th 2014