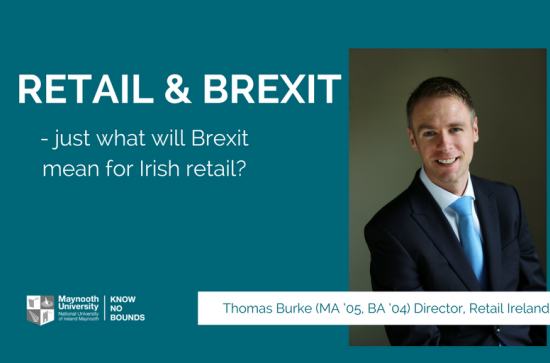 Join us for a breakfast briefing with alumnus Thomas Burke (MA ’05, BA ‘04), Director of Retail Ireland at Ibec, on the hot topic of Retail & Brexit - Just what will Brexit mean for Irish retail?

Retail, Ireland’s largest private sector employer, faces significant challenges arising from the decision of the UK to leave the European Union. The close links between the Irish and UK economies, and a wide preponderance of shared high street retail brands, gives rise to a significant exposure for the Irish retail trade to the downside risk of Brexit.

Growth within the retail sector has been modest over the past two years. Uncertainty around the future shape of the relationship between the European Union, and by extension Ireland, and Britain, has weighed on consumer minds and this has weakened consumer confidence and slowed consumer spending over the last 12 months. Furthermore, a dramatic shift in exchange rates and its resulting impact on the sector’s relative competitive position has meant that Brexit is not just a future concern for the sector, but is a reality today for Irish retailers. Depending on the outcome of ongoing negotiations, there is a very real possibility that consumer choice and consumer prices will be impacted by new trading patterns and rules. We must therefore, do all in our power to ensure Irish consumer interests are prioritised during the Brexit process. 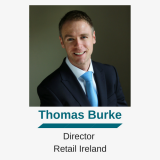 Thomas Burke joined Retail Ireland from the Alcohol Beverage Federation of Ireland (ABFI) in late 2014. Thomas first joined Ibec in 2005 when appointed as Executive with special responsibility for economic affairs with Food and Drink Industry Ireland (FDII). Among his achievements during his time with FDII was the establishment and delivery of Ireland's first National Breakfast Week. During his time in ABFI he was to the forefront of representing the brewing sector and wider drinks industry at National and European level as well as acting as the media spokesperson for the brewing industry. He holds a BA in Economics and Geography, and a Masters in Competition Law and Regulation from Maynooth University.

This event has limited availability so early booking is advisable.
Alumni and Maynooth students book your place through the Maynooth Alumni Community Network.

Not a Maynooth graduate but would like to attend this event?
You're very welcome. Just email alumni.events@mu.ie or call 01 474 7670.