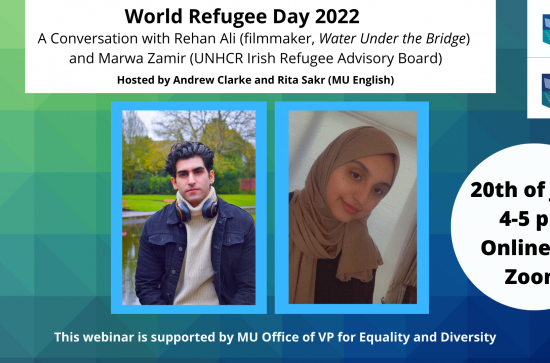 Organised and hosted by Andrew Clarke and Rita Sakr (MU English), this webinar is generously supported by MU Office of the VP for Equality and Diversity, and is a collaboration with MU Sanctuary committee and the Irish Network for Middle Eastern and North African Studies

Rehan Ali graduated with a BSc in Neuroscience and is currently studying for his MSc in Bioinformatics and Computational Biology at University College Cork. After arriving in Ireland from Pakistan in 2005 he spent his childhood in a Direct Provision centre called Bridgewater House in Carrick-on-Suir, Co Tipperary. Living under Direct Provision for ten and a half years, he developed a deep fascination with storytelling and film. During this time, he joined The Tudor Artisan Hub, an independent dynamic arts collective based in Carrick-on-Suir that allowed him to write, direct and edit his own student films. In 2015 Rehan, along with the Tudor Artisan Hub, founded a community-based amateur film production company ‘Studio42’. From 2015 to 2019 ‘Studio42’ produced 6 short films largely funded by Culture Night, the Department of Culture, Heritage and the Gaeltacht and the Creative Ireland Programme in association with Tipperary County Council. His work is published in Correspondences and The Stinging Fly Magazine, for which he was awarded a Narrative of Equality, Diversity and Inclusion Award by UCC. Rehan most recently won the Virgin Media Discovers Short Film Competition for his script “Water Under the Bridge” that he went on to direct for Virgin Media Television and Virgin Media on Demand, premiering at the 2022 Dublin International Film Festival.

Marwa Zamir is from Kabul, Afghanistan. She came to Ireland in 2016 with her family and spent 3 years in Direct Provision. She received her refugee status in 2019 and is planning to study Law starting 2022. Marwa is passionate about using her voice to help others and to advocate for improvements for people who are seeking protection in Ireland. Marwa was nominated for a Mayo Garda Youth Award in 2019 for her community work with Foróige. She contributed a part of her story to Correspondences: An Anthology to Call for an End to Direct Provision (2019). She has been invited to read her work at various events (including a meeting with President Higgins) and gave an interview on the RTE Arena radio show. She is a volunteer with Foróige Youth Club, a Youth leader within the Irish Refugee Council Youth Project and currently undertaking the Silver Award Gaisce (presidential award). Marwa was recently appointed to the UNHCR Refugee Advisory Board. The Board’s aim is to ensure that the voices of refugees are heard in policy decisions that affect them; in doing so, it will discuss issues that affect their communities and propose solutions to them. Marwa has also worked with the Zamir foundation, an Afghan NGO working to fight food poverty in Afghanistan.

Register to attend via Eventbrite: https://www.eventbrite.com/e/world-refugee-day-2022-a-conversation-with-rehan-ali-and-marwa-zamir-tickets-348639749877