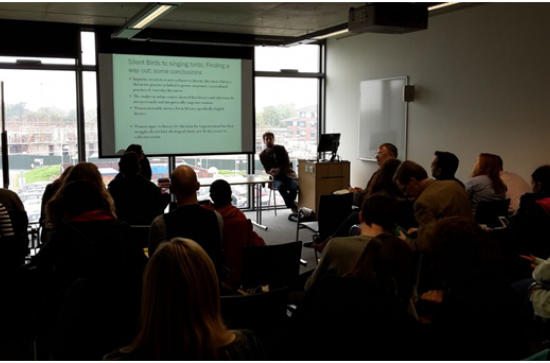 As part of her Scholars at Risk Speaking Tour of Ireland, Dr Shirin Zubair gave a presentation on her work as an academic in Pakistan and the politicisation of academic institutions and curtailment of academic freedoms in Pakistan to Department of Law students as part of their Civil Liberties module.

Dr Zubair also gave a number of other presentations to Maynooth students and staff during her Tour, including a talk on her research in the field of gender studies, Silent Birds: Metaphorical Constructions of Identity in Pakistani Women's Talk, to members of the Social Justice, Participation and Human Rights Research Cluster.

SAR Speaker Tours are designed to raise awareness of attacks on scholars and academic freedom worldwide through the organisation of events at network member institutions featuring formerly at-risk scholars now outside of the country of danger. These events help scholars make new contacts and re-establish the personal and professional relationships that lead to future opportunities, while at the same time introducing local higher education communities to these inspiring, courageous individuals. This speaker tour was organised by Universities Ireland and involves visits to 5 universities on the island of Ireland.

Dr Shirin Zubair is an established academic in the field of English literature and gender studies, who holds a PhD and MSc in Applied Linguistics from a university in the UK, where her dissertation focused on women’s literacy in Pakistan. She has more than 25 years of experience lecturing and conducting research at Pakistani, US and European universities and was until recently the Chair of the English Department at a university in Pakistan. The recipient of multiple international research fellowships and awards, including from the Ford Foundation and the Fulbright Program, Dr Zubair has also published widely, editing multiple books and contributing to Pakistani and international journals on a range of issues relating to new literacies, representation of gender, and media. Dr Zubair came into contact with Scholars at Risk after she was forced to flee from Pakistan after facing death threats because of her work.

Scholars at Risk is an international network of higher education institutions dedicated to promoting academic freedom worldwide. Around the world today, scholars are attacked because of their words, their ideas and their place in society. Those seeking power and control work to limit access to information and new ideas by targeting scholars, restricting academic freedom and repressing research, publication, teaching and learning. The Scholars at Risk Network responds to these attacks. For further information on the Scholars at Risk website.

Law Students interested in contributing to the work of Scholars at Risk can contact Dr Noelle Higgins for more information at noelle.higgins@mu.ie.