Creating a buzz in the bee industry

A new spin-out from Maynooth University stands to create a buzz in the migratory bee industry, which has suffered devastating declines in hive populations in recent years. 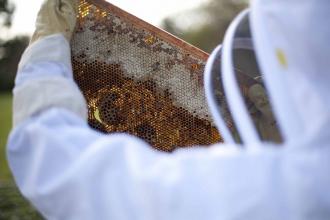 It’s one of the most natural images in the world: a bee carrying pollen to a flower, which in turn develops into a fruit that humans can enjoy. But something has been going awry with that process – in the United States, bees brought in to pollinate monoculture crops of soft fruits and almonds have been dying off in massive numbers. Now a spin-out company from Maynooth University stands to create a buzz with a new feed to boost the health and vitality of those bees and help avoid such catastrophic losses in hives.

The spin-out is the brainchild of Dr Kevin Kavanagh, a senior lecturer in the Department of Biology at Maynooth University, who explains the central role of bees in commercial fruit production. ‘For most people bees equate to honey, but they play a far more important role in the pollination of crops, and are vital for the production of 40% of the world’s fruit and vegetables’ he says. ‘In Ireland and most parts of Western Europe there are enough farmed and wild bees to look after that, but in the United States because of the huge amount of monoculture they operate, they need to import bees to pollinate the crops.’

Migratory hives are brought on a tour of the US between January and July of each year, releasing the ‘bees for hire’ at different sites to pollinate single crops like almond, apples, peaches, or blueberries. The bees spend a few weeks visiting one crop, are then packed up in the hives and moved on to the next crop as needed.

‘Individual farmers have a thousand acres of trees but no bees to pollinate them because they have sprayed to kill them off as pests,’ says Dr Kavanagh. ‘So there are bee farmers who raise bees just for pollination services – in total, 1.5 million hives move around the US between January and the end of July on trucks and trains.’

Being ferried from one abundant food resource to the next might sound like a sweet deal for the bees, but in practice there’s a sting: the stress of travel and the unvaried diets can cause problems, explains Dr Kavanagh. ‘Bees aren’t used to it, they are used to more variety in their food sources, and when the bees are moved there’s a stress,’ he says. ‘In the wild, normally a bee population will remain in the wild in a tree, where they live and die, but now they are being shipped thousands of miles for weeks at a time. When they get to their new location they are disorientated, and then for the next three weeks they have nothing to eat but one food source. Someone once described it as like eating only custard for three weeks.’

And the stress is showing – in recent years the migratory bee populations have been decimated. ‘The bee numbers are collapsing,’ says Kavanagh, noting that in 2007 beekeepers in the US opened the hives after winter to find around 80 per cent of colonies had died. ‘The migratory behaviour and the monoculture seem to be key elements in colony collapse,’ says Kavanagh. ‘They don’t forage as efficiently in monoculture as in woodland, and even though the level of nutrition might be right to keep them from starving, the lack of variation in the monotonous diet impacts on their immune response. Meanwhile, all the time they are carrying viruses and pathogens that normally they can keep under control, but because their immune system is getting weaker they can’t.’ Studies by Kavanagh’s research group confirm that bees fare poorly with a lack of variety in the diet.  ‘We test the bees, giving one group a monotonous diet, and another a varied diet, and then we infect them with a pathogen,’ he explains. ‘The bees on the monotonous diet die, while the others survive the infection. Bees need variety in their food.’

But Kavanagh and his team have now identified a feed that can be added to hives to help overcome the issues of monoculture. ‘Basically we can boost their vitality and immune response so we can offset some of the disadvantages of the monoculture problem.’ The idea arose from their studies on the caterpillar moth Galleria, which they were developing as a tool for drug screening. ‘We began to study the immune system of these larvae and we found strategies for either knocking out the immune system of the larva or boosting it,’ he says. ‘Some of the results from that gave us an opening where we could identify a feed we could give them to boost the response to make them resistant to pathogens and clear them. We took that idea and applied it to the bees.’

But the big question was: would the bees bite? ‘They are extremely fussy eaters, they won’t take anything they are not 100 per cent happy with,’ says Kavanagh. Luckily, trials on hives in Greece last year showed the insects were happy to ingest the feed, and further investigations in Greece, Ireland and in the US have shown that when the feed is added to hives, bees can both fight off and clear infections of the pathogen, Nosema.

Beemune, is now looking to target the 1.5 million migratory hives in the US, where farmers rent each hive at $65 per week to pollinate their crops, explains Kavanagh. ‘The industry is worth €3.5 billion globally – it’s a significant opportunity’ he says, noting that Beemune has already established links with a company in the US that sells products to beekeepers.

The product is likely to need specific market testing and tweaking for optimum dosage in the migratory UShives, but Kavanagh is optimistic that the feed could be added to some hives there during the summer. And while the company is keeping details of the feed itself under wraps, Kavanagh insists there’s no safety issue. ‘Because this product has been used in human food for many years it’s safe to use, there are no toxic side effects.’

The Company – which is 50% owned by Maynooth University – aims to develop a range of feeds for use with bees. It is hoped that its products will assist beekeepers in controlling disease and maintaining healthy hives for pollination and honey production. ‘Bees play an essential role in world food production and problems for them will eventually affect the quantity of food produced in many countries. Our best strategy is to help the bees so that they can continue to help us!’ says Kavanagh.