Exploring the mysteries of protein self-assembly and malfunction 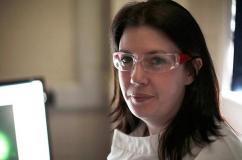 Protein as a word is instantly recognisable. We can name foods high in protein and we know they are needed to build muscle, but there is so much more to them.

DNA grabs headlines, but proteins do all the work in our cells and bodies. If they break down or become misshapen, sickness can follow. Scientists dub proteins the workhorses of biology. Faulty proteins are implicated in Alzheimer’s, Parkinson’s and diabetes.

Dr Jennifer McManus in the Department of Chemistry studies these sometimes frail biological machines. She says proteins can be bent or altered so that Velcro-like sections become exposed, causing them to stick together. She delves into this protein world by studying cataracts – clouding of the lens.

“The lens becomes cloudy because the proteins are sticking together and they become larger than the wavelength of light,” she explains. Her work on the protein responsible seeks to pare back the mysteries of protein self-assembly and malfunction. Insights here have relevance from Alzheimer’s disease to the Ebola virus, from new drugs to baby formula.

Gamma crystallin proteins in our eye lens sit and focus light onto our retina. “They would tend to stick to one another, except that they are part of a complex mixture,” explains Dr McManus, but a change to this mixture can result in protein clumping or crystallization and cataracts.

Dr McManus is not looking to cure cataracts – this can be done via surgery. Instead she is using these proteins as a window into why proteins behave or misbehave. Proteins are made up of amino acids; there are 23 different ones to choose from as building blocks; their sequence gives a protein its complex 3-D shape. One approach is to take a virtual hammer and knock out building blocks or swap them around by introducing mutations.

“I am interested in the patchy surface chemistry of proteins and how this contributes to their behaviour. If you make a single change, it doesn’t change the overall protein structure hugely. But it can have a dramatic effect on how it behaves,” Dr McManus explains. She reported in the prestigious publication PNAS that one single change turned a protein’s behaviour topsy-turvy.

“The mutation inverted its solubility. It became more soluble when you cooled it down than when you heated it up,” she says, “the opposite to what you would expect.” She is continuing this work and is currently funded by Science Foundation Ireland and has collaborated with Prof. George Benedek at MIT, amongst others.

Dr McManus’s work helps compile the rulebooks proteins follow, which can be referenced by other scientists. And there are numerous real world impacts from protein changes. For example sickle-cell anaemia is caused by a single amino acid substitution in the protein haemoglobin. This causes red blood cells to pile up in traffic jams, hampering oxygen delivery to tissue. It’s an inherited condition – in the genes. But conditions also impact proteins.

“If you are running a very high fever, some proteins with low melting temperatures may change shape or open up to expose amino acids,” says Dr McManus, which can be harmful. Yet another example concerns Ebola; this year the envelop protein of Ebola virus was discovered to be a shape-shifter. US scientists described how it acted like a transformer toy, changing shape as time went on; they presume its surroundings trigger transformations and say this insight could help them develop a cure.

Proteins can be damaged when they are knocked about, put under pressure, experience higher salt concentrations or temperature shifts. They may become clumped (or aggregated). Some distort when they contact certain surfaces like silicon, which is hydrophobic (repels water). This matters a great deal to drug companies as they increasingly look to proteins as therapies. Over 100 proteins are approved for patients in the EU and US.

Before putting proteins into patients or even in products, scientists must understand their behaviour. Dr McManus does this using “phase diagrams,” maps of how a protein will behave under varying conditions. This is crucial at both ends of the drug development pipeline.

“It is difficult for a company trying to identify which products to develop further because not all proteins are going to be stable enough in manufacturing. You need to predict or measure at an early stage of development which ones will be stable when produced in large quantities,” she says. “You want to know how to keep it stable. That requires a lot of formulation work.”
Formulation is about getting the recipe right. A drug company will usually concentrate therapeutic proteins in a drug, but this can cause clumping. This could take away the capabilities they were designed for – helping patients. “We are looking at protein condensation,” says McManus. “That often means aggregation and that is one with the most industrial importance. We have an increasing number of big biopharma companies manufacturing in Ireland, and [protein] aggregation is often going to be an issue for them.”

McManus’s lab operates at the frontiers of protein behaviour, filling in the unknowns. “A lot of fundamental knowledge is missing, even in determining how stable a protein is,” she says. She recently reported techniques to better study the tangled proteins in Alzheimer’s, in collaboration with Prof. Joachim Rädler in Munich, Germany, and Prof Dominic Walsh in the Harvard Institutes of Medicine.

She also partners with food scientists, in work funded by the Department of Agriculture. “I work with collaborators in Teagasc looking at high concentration dairy products and how to formulate them. You want a nutrient-rich product but one that is stable,” she says, such as baby milk formula with added nutrients. The milk proteins should stay in their natural form and the powder not clump.

Dr McManus leads a team of six PhD students in a lab with a mix of biology and physics equipment; she started out as a chemist and then studied the physics and physical chemistry of proteins in MIT. Being positioned at the frontiers led her to combine disciplines. “I might call myself a biophysical chemist, but boundaries between disciplines have become blurred in science.”

Her research brings her into contact with medics working with patients, scientists working on new drugs and experts developing consumer food products. “The fundamental aspect of the research is very exciting. But we are trying to answer important questions that affect people: You, me, everybody. That helps us stay focused.”