“If you want peace, prepare for war”?

New research on the classical world shows peace to be as elusive then, as it is today

For many with a general interest in Classics, tales of war are central to their engagement with ancient Greece and Rome. From the sack of Troy to the fall of the ‘Eternal city’ itself, conflict and combat dominate the ancient past. But take a closer look and you will see that, while the ancients did accept war as a necessary part of life, they knew it too well to idealise it; marked by real experience, the Greeks and Romans were keenly aware of the virtues and value of peace. As Herodotus, the father of history, noted: "No one is so foolish as to choose war over peace. In peace sons bury their fathers, in war fathers bury their sons." 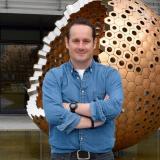 Traditionally, that counter commitment to the resolution and avoidance of conflict has been poorly considered by historians. Certainly in Classics, the study of peace has only recently started to gain ground, with a flurry of new work on ‘ancient peace’ in the last decade or so. But even those studies have tended to be too particular in their focus on key sites and/or eras. All of which led to a new initiative by members of the Department of Ancient Classics at Maynooth University, to explore the importance of peace in its own right, across antiquity.

Directed by Dr Eoghan Moloney (pictured) and Dr Michael Williams, with contributions from colleagues William Desmond and Gordon Campbell, this peace project has grown steadily and now forms the basis of a new book, Peace and Reconciliation in the Classical World, a collection that explores the variety of ancient attitudes and approaches to key themes.

The collection offers a wide-ranging review of ancient peace – from Classical Greece to Late Antiquity – that is entirely appropriate to an ever-changing subject. For peace, then and now, is not just the absence of war or the end of war, but is a more intangible concept. Given that ideas on peace constantly shift and are not easily understood when separated from the contexts in which they were formed, a standard history charting the development of core initiatives and processes is not possible. Consequently, Moloney and Williams offer a compilation of case studies that highlight how open these concepts are, which in turn prompts reflection on our modern assumptions and understanding of peace.

Ancient peace and war -- two sides of the same coin
Many ancient pictures of peace connote imagined ideals of lives led in comfort and tranquillity. However, such happy states tend to belong in the distant past – only in a mythical Golden Age could one find humanity ‘living like gods, without sorrow of heart, remote and free from toil and grief’ (Hesiod, Works and Days).

In the real ancient world, war and peace remained very much two sides of the same coin. Even in crucial periods like the 4th century B.C., where we see leading Greek intellectuals plainly denounce the ruinous pursuit of war, any commitment to peace remained conditional. Even as important figures like Xenophon and Isocrates called for a new international order based on concord and cooperation, they never excluded the possibility of future wars.

Indeed, a key benefit of peace explored in innovative texts like Ways and Means and On the Peace was that it allowed stated the opportunity to prepare properly for future conflict.

Similarly, the great empires of the ancient eras would promise subjects the antipathetic goals of domestic peace and foreign conquest. Even the most important and enduring peace accords in ancient history were, crucially, instruments of hegemonic control. The Macedonian domination of the Greek world and Augustus’ famous Pax Romana brought an end to ruinous wars, but these are examples of peace as conquest, peace through victory, and peace by pacification.

Of course, as in modern processes, issues of power were inherent across any such negotiations, but the violence that so often preceded the enforcement of ancient peace is somewhat disconcerting to many today.

Even though some individuals did question the authority and validity of ‘peace achieved by war and weapons’ (Cicero, ad Brut. 2.5.2) – Tacitus famously complained of the Romans’ imperial drive, ‘they make a desert and call it peace’ (Agricola 32) – a real world without conflict remained almost unthinkable for Greek and Roman society in general.

Consequently, holding the ancient world to modern ideals will not do. There is a rich dialogue on peace in antiquity, but it does not always run as we might expect. For example, we certainly find no pacifist movement in antiquity. Instead, society endeavoured to manage and contain war when, inevitably, it came.

Ancient reconciliation
The Greeks and Romans sought to foster the proper conditions in which peace might be restored and maintained for as long as possible, and it is in the consideration of these restorative processes – discussions on diplomacy, identity, arbitration, alliances, truces and treaties – that  key precedents can be found. From Plato and Aristotle’s proposals to control the uses of war through education and legislation to the struggles of early Christians to maintain peace for themselves and their communities, there is much in the ancient discourse on peace for later history to consider.

As striking as it may be to consider these ancient practices in themselves, that inquiry may also prompt reflection on modern peace initiatives.

Modern experience not dissimilar to classical world
While the ideals of contemporary society aspire to some very different goals, the reality of the modern experience is not so dissimilar. Though one might feel that a belligerent understanding of peace is no longer standard, most would still justify the use of violence and war in the service of that greater good (Vegetius’ old Latin quip – si vis pacem, para bellum, ‘if you want peace, prepare for war’ – survives as the motto of the Royal Navy).

War is still endemic, and certainly recent Irish history has shown just how elusive and contradictory a condition peace continues to be. And so the consideration of the Greek and Roman pursuit of these goals provides a much-needed context, and perhaps some comfort, for modern peace studies.

Peace and Reconciliation in the Classical World edited by Moloney and Williams will be published by Ashgate in 2016.