Inside the atom: Marking the 10th anniversary of the Higgs boson discovery 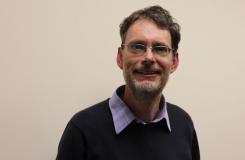 Ten years on from a monumental moment in particle physics, Prof Jon-Ivar Skullerud, Department of Theoretical Physics, discusses what we know and what’s yet to discover about the sub-atomic world.

In May 2013, physicists from the University of Edinburgh visited Maynooth University to speak about their work in particle physics at the Irish Quantum Field Theory annual meeting. Unusually for such an event tickets were sold out. The reason? Professor Emeritus Peter Higgs, who had come to public attention the year before when the boson (a sub-atomic particle) that bears his name was observed in the Large Hadron Collider (LHC) at CERN.

In July 2012, the ATLAS and CMS collaborations at the Large Hadron Collider announced the discovery of a new particle with features consistent with those of the Higgs boson predicted by the standard model of particle physics. Decades earlier François Englert, Peter Higgs and the late Robert Brout made a prediction of a new field, known as the Higgs field. At the time they suggested that the Higgs field is ubiquitous, occurring across the universe, that it gives mass to elementary particles, and manifests as a particle: the Higgs boson.

The discovery was a validation of the LHC, one of the largest experiments in physics, and the theory that governs particle physics, the standard model. In the 10 years since the discovery further investigation of the Higgs boson has only strengthened this validation with more recent experimental data confirming the properties of the particle, like its absence of spin, that are similarly predicted by the standard model.

Ongoing research at ATLAS and CMS into the Higgs is continually pushing the boundaries of knowledge and includes investigations into the possible connections between the Higgs and dark matter, and even more radical physics to expand the standard model and move into a new era for physics.

As theoretical physicists, my team and I look at the potential of our work in perhaps a similar way to how Englert, Higgs and Brout did of their theory many years ago. Like them our research also involves fundamental particles and mass, but unlike them, our work involves a specific part of the standard model responsible for one of the most important forces in nature and the particles that it works upon.

The Higgs boson imbues some sub-atomic particles with mass, but this only accounts for 2% of the mass for all the matter around us. The other 98% is due to the energy created by interactions between two different types of sub-atomic particles: quarks and gluon. Inside the nucleus of every atom are protons and neutrons, and inside very proton and neutron are three quarks. The quarks move around at nearly the speed of light, and are prevented from flying off into sub-atomic space by the strong interaction, represented by gluons.

The theory governing the strong interaction happening inside an atoms’ nucleus is a particularly complex part of the standard model called QCD – Quantum ChromoDynamics. The strong force holds the quarks inside a proton or neutron, and the proton and neutron inside a nucleus. This is the focus of our work – how does 98% of the mass of all the matter around us come to be from the interactions happening between quarks and gluons?

Like the theory of the Higgs Field, QCD has been accepted in the scientific community for many decades, being proposed in the early 1970s and completing the standard model as we know it. Despite all its successes, in the 50 years since, there are still many questions to answer – one of them being the exact mechanism through which energy, and mass, is created by three quarks interacting inside protons and neutrons. Although scientists, like our team, can show what happens through computer simulations using the terms derived from the standard model, scientists have yet to discover the mathematical proof that definitively answers this question.

What we know is that the theory of the strong interaction, from a mathematical point of view, is a very concise, self-contained and it works, but there are outstanding questions that myself and my team are working on. First, how exactly does mass form? We have good ideas to answer this question but not the full picture.

Second, how are quarks kept inside the nucleus of a proton or neutron? We know that it happens, that the calculations align with reality, but we don’t know the exact mechanism of how this takes place. The third puzzle is what happens at extreme temperatures like that of our early universe just after the Big Bang. This is one of our most active research areas. We can simulate these high temperature conditions where the strong force was much weaker than it is low temperatures. What we see is that at high temperatures quarks and gluons are not yet bound within protons or neutrons.

We are trying to calculate the properties of that matter called the quark-gluon plasma.  This ties into the experimental work happening at CERN and the LHC and Brookhaven in the USA. Here researchers are colliding lead (at CERN) or gold (at Brookhaven) nuclei together to recreate what happened during the Big Bang and to try and determine what’s happening to the quarks and gluons.

One of the most interesting lines of our research is in propagators, mathematical functions that describe how quarks propagate. This should shed some light on the question of how and why quarks stay confined inside a proton due to the strong force, ultimately giving us some insight into how, and what, mass is generated by the strong interaction.

The discovery of the Higgs was monumental for particle physicists – but we know that this is just one small part of the story, of how our universe has evolved and how matter, the very stuff of the world around us, has come to be. We hope to shed light on these questions in the years to come.

Prof Jon-Ivar Skullerud, is an Associate Professor at the Department of Theoretical Physics, and the Hamilton Institute; additional input from PhD student Jesuel Marques Leal Júnior.