It's all a game - from chess to election campaigns 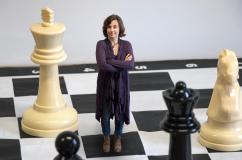 The British were fed up with all the cobras in India. An eradication programme began, with locals given cash by the British Empire for every dead snake. So, the locals set up snake farms and saw the money roll in.

The capital of Columbia, Bogotá, introduced a road-space-rationing regulation based on the last few digits of a car's license plate. The intention was to halve the number of cars on the road. But households bought more cars: one to drive from Monday to Wednesday and the other from Thursday to Sunday. The 'cobra effect' on the roads of Bogotá.

"Game theory can help us avoid making policies with unintended consequences," says economist Dr Tuvana Pastine at Maynooth University. "A good chess player figures out the eventual repercussions of each move before making a decision. If the player is unable to correctly anticipate how the other will respond, the game is lost. The same is true in many real-life situations from competition between Apple and Samsung in the smart phone market to politics."

Game theory is useful whenever what you get depends on the actions of others as well as your own choices. In the last twenty-five years, ten Nobel prizes have been awarded to game theorists. The field has exploded with applications in economics, sociology, psychology, business, finance, evolutionary biology, and even engineering.

Dr Pastine is one of Ireland’s leading practitioners of game theory. Her recent interest is analysing political campaign finance legislation.

Do TD's have an unfair advantage in getting re-elected? What can we do to level the playing field so that the people we elect to represent us are competent, hard working and have our best interests at heart? Does the need to raise money for election campaigns give special interests undue influence on policy? Dr Pastine examines these issues to help develop political campaign finance legislation to improve the quality of democracy.

For example, Ireland, like Canada and the UK, imposes limits on the amount of money that a politician can spend when running for office. Because special interest groups want to influence policy makers, officeholders find it easier to attract donations than challengers do. By limiting the amount that politicians can spend when running for office, it is often argued that the playing field can be levelled allowing challengers an opportunity to have their cases heard by the public. This can help us elect the best qualified candidates, rather than always re-electing the current officeholders simply because they have more money to make themselves heard.

Dr Pastine analyses political campaign spending limits using game theory. Just as in a game of chess where the player's best course of action depends on what she expects the other player to do; strategic interaction exists in political competition between politicians.

“Each politician's best course of action depends on what their rivals are doing,” Dr Pastine explains. “When setting political campaign finance legislation, it is important to understand not only the direct effect, but also to realise that the legislation will change the intensity of political campaigning. Hence it is important to analyse the nature of the competition between candidates to understand the full implications of the legislation.”

Dr Pastine examines the 'game' between rival candidates and shows that the common argument that spending limits curtail the ability of current officeholders to exploit their fundraising advantages is correct, but only up to a point.

“Moderate political campaign spending limits can indeed help level the playing field. However, if the limit is too restrictive, allowing only very small expenditures, it can have the opposite effect. People already know the officeholder but the challenger needs to introduce themself to the electorate.”

In her co-authored research, Dr Pastine shows that extremely restrictive spending limits make it very difficult for the challenger to overcome the officeholder's head start, hence the incumbent gets re-elected even when the challenger is a better candidate.

"While campaign spending limits can be beneficial, in practice they are problematic," Dr Pastine says. "Since the level of spending permitted is decided by the sitting officeholders, it is likely that they will choose a level that will increase their chances of being re-elected. In principle spending limits are an attractive way to improve democracy. But in practice without direct political pressure from the people, officeholders are likely to make the spending limit so restrictive that it actually makes the political system less responsive to our needs."

"Game theory is a mathematical study of the interaction between decision makers," Dr Pastine says. "However, mathematics should not stand in the way of people accessing the basic logic of game theory." She has a new non-technical book out to introduce anyone and everyone to the subject: Introducing Game Theory, A Graphic Guide from Icon Books. She wrote this book with Dr Ivan Pastine and the award-winning cartoonist Tom Humberstone.

Dr Pastine introduces the subject using examples from a wide variety of fields. She uses a light-hearted illustrated approach to show how game theory can provide useful insights into real-world problems.

She shows how game theory can help us understand why investment markets, such as the Irish housing market, often suffer from speculative bubbles and then crashes; why it may be impossible to predict the timing of a financial crash; why evolution does not always improve the fitness of a species; why your wireless network is so slow, and what can be done about it; why it is difficult to move society away from gender-based role division; why religious groups often wear distinctive clothing; why committees keep revisiting the same issues over and over again.