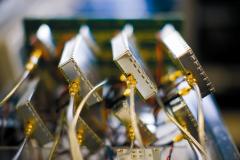 Despite the rapidly increasing speeds and ever-growing memory of today’s computers, even supercomputers have their limitations which come from underlying physical principles.

Although computing has successfully penetrated all areas of life and society, there are a large number of important computational problems that remain intractable, i.e. they cannot be solved efficiently. Because the design and hardware of today’s machines are based on the physics of classical mechanics, they are for example unable to properly model problems in quantum physics that are vital for nanotechnologies.  Another example is factoring very large numbers into prime numbers - its also intractable on a conventional computer, but can be efficiently solved on a quantum computer. The relevance of such factorisation goes far beyond mathematics to ensuring the security of data held on computers and protecting the integrity of transactions carried out over the Internet.

The computers in current general use in homes and businesses essentially function by repeatedly manipulating two numbers, one and zero. If a particular physical characteristic is ‘on’ that’s a one. If it’s ‘off’, that’s a zero.

This simple concept has enabled people to perform ever more sophisticated processing of information, but it has its limitations. So more and more researchers of computer science, physics and mathematics are studying quantum computing, where a qubit (quantum bit) can exist in a state that is simultaneously both zero and one. This special feature allows quantum computers to perform computation at the highest possible level of parallelism.

“Quantum systems are a very rich technological resource with applications in all domains of information processing, including computation, communication and cryptography,” says Dr Jiri Vala of the Department of Theoretical Physics in Maynooth University. “They are certainly extremely powerful, moreover they seem technologically inevitable.”

A major challenge to face is that quantum computers have components even smaller and more fragile than those in use today and thus are susceptible to errors caused by the passage of stray particles and by unwanted interactions with electromagnetic or other physical fields.

Going beyond the classical physics, Dr Vala and his research team at Maynooth University work in a highly specialised area known as topological quantum computing which offers the prospect of powerful quantum computers that are also naturally fault-tolerant.

Topology is the study of the global properties and spatial relations unaffected by a continuous change in the size or shape of objects like figures or graphs. A practical example is the London Tube map. It could be depicted as if pulled sideways or up and down or it could be twisted, and still the stations would all remain in the same relationship with each other.

The fault-tolerance comes directly from the quantum physics of ‘strongly correlated two-dimensional many-body quantum systems’. Put very simply, in this case quantum information is stored and processed within quantum states that are sensitive only to the global structure, i.e. topology of these systems. This means that the quantum errors, which are local, cannot affect it. Quantum systems with this property are said to be in a ‘topological phase’, Dr Vala’s area of particular expertise. His work involves searching for the signatures of topological phases in quantum materials.

This means it will lead to a new generation of fundamentally more powerful computers, and the resolution of certain long-standing dilemmas in the theory of computation complexity. The new computers would also assist in the development of nanotechnology and in other areas such as drug design and modeling and in national security.

Indeed, he says that when quantum technologies become widely available, they will have as great a revolutionary impact on society as the development of personal computers or lasers. In fact, quantum technology is already in commercial use in the field of quantum communication and cryptography. For example the New York based company, MagiQ Technologies provides quantum solutions for its clients’ security issues.

Dr Vala joined the Department of Theoretical Physics at Maynooth University as a recipient of the President of Ireland Young Researcher Award 2005, sponsored by the Science Foundation Ireland. The award was provided to allow him and his team of a Post-doctoral fellow; Dr Graham Kells and two PhD students; Ahmet Bolukbasi and Niall Moran to work at Maynooth on ‘Topological phases and topological quantum computation.’