A return to urban farming 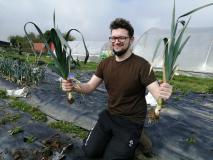 A return to urban farming

As long as there have been cities, there has been urban agriculture of some description, writes Stuart Lang, PhD student in the Department of Anthropology

Ever considered growing food in your front garden? What about inside a shipping container, or maybe a warehouse rooftop? This is the world of urban agriculture. In places like these, urban farmers are growing a myriad of fruits and vegetables, raising animals and growing microgreens indoors under dazzling arrays of UV lights.

Whether commercial or communal, an urban farm generally has much less land to work with than a conventional farm and many do not have access to heavy machinery. As a result of these limitations, they use a wide range of novel farming practices and most tend to run mainly on manual labour with a minority relying on highly specialised technology. Another difference is that most urban farms are not involved in livestock, with the exception of chickens, in some cases.

While sometimes touted as a new innovation, urban farming has been a part of human civilisation for thousands of years dating back as far as 3,500 BCE Mesopotamia. As long as there have been cities, there has been urban agriculture of some description. If we look to more recent examples of urban farming activity in Europe, we find plenty of examples throughout the last 300 years.

In the 17th century, 300 hectares of specialised walled gardens were built in Montreuil, a suburb in the east of Paris, to grow peaches. The 'walls for peaches', or ‘murs à pêches’ as they would become known, produced peaches which became highly sought after. It is said that the aristocracy of Europe acquired a taste for them, with many monarchs visiting the walled gardens over the years. The peaches provided a healthy income for the families of the area until the end of the 1800s when the area became a victim of intense urbanisation and only a small fraction of the walled gardens survive today.

If we look across the Irish Sea, we find one of the earliest attempts to create a city with urban growing as a central tenet of its design in the form of the Garden City. Formulated by Ebenezer Howard in his 1898 book 'Tomorrow: A Peaceful Path to Reform', the Garden City was specifically designed to combat the poverty of industrialised urban life by combining what he saw as the best qualities of the urban with those of the rural. Howard’s book gave rise to the formation of a Garden City movement which in 1903 began construction on the first ever Garden City. The result was Letchworth Garden City, a town a little over an hour’s drive from London with the concept of urban farming built into its DNA.

Ireland does not have as rich an urban farming legacy when compared to that of France or the United Kingdom. There is little in the way of specific historical record when it comes to urban agriculture, but that is not to say there is no history of the practice. While urban community allotments have officially been in Dublin City since 1910 and Cork City since 1917, people have produced food individually, communally and, at times, commercially in large towns and cities across the island for countless generations.

While urban allotments have been in the country since the early 20th century, Ireland has seen something of an urban farming revolution in the last 10 years alone, with many projects and businesses having sprouted. Each approaches urban farming in a different way, taking inspiration and doctrine from urban farms around the world.  In Celbridge, Co Kildare, Derrybeg Farm is a community-focused farm which subscribes to the Community Supported Agriculture, philosophy. Cork City is home to the Cork Rooftop Farm, the Gnomes in Dublin are becoming well renowned specialists in market gardening and St Anne's City Farm is another increasingly well-known urban farm based in St. Anne’s Park, Raheny.

While each of these farms may vary wildly in what they produce and how they distribute said produce, they share some overarching beliefs that guide them. These include combating urban decay, sustainable food production, food security, and employment of chemical free growing methods. As individuals, growing food in the back garden was once incredibly common in our cities and the Grow It Yourself movement has seen carrots, potatoes and strawberries return to many gardens. With the onset of the Covid-19 pandemic and subsequent lockdown, home growing has exploded in popularity.

The world is becoming increasingly urbanised. According to the Central Statistics Office, over 60% of the country's population live in and around cities and this number will undoubtedly continue to grow. With more people wanting to eat and drink organic produce that is grown and distributed with a low carbon footprint, growing and raising urban food is slowly becoming an integral part of our towns and cities and is likely to become an important part of a sustainable future for all.