Science Week: The sweet side of Alphafold: Generating more complete models of our bodies’ protein structures 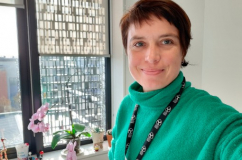 The sweet side of Alphafold: Researchers at MU and York University rebuild sugars on AI-predicted protein structures

New research building on AI algorithms enables scientists to generate more complete models of the protein structures in our bodies - paving the way for faster design of therapeutics and vaccines.

The study by the University of York in collaboration with Maynooth University, used protein structure predicted by artificial intelligence (AI) to help researchers understand how sugars complement most proteins in our bodies.

Up to 70% of human proteins are surrounded or scaffolded with sugars, which play an important part in their 3D structure and function. Moreover, some viruses like those behind AIDS, Flu, Ebola and COVID-19 are also shielded behind a sugar coat (aka glycan shield). The addition of these sugars is known as a protein “modification”.

Dr Fadda’s research group in the Department of Chemistry and Hamilton Institute at Maynooth University, and Dr Agirre’s research group in the Department of Chemistry at the University of York created a software that completes the protein structural models predicted by AlphaFold, an artificial intelligence program developed by Google's DeepMind, by adding the missing sugar components. This work is presented in the Correspondence “The case for post-predictional modifications in the AlphaFold Protein Structure Database”, published in the November 2021 issue of Nature Structural & Molecular Biology.

Dr Jon Agirre from the Department of Chemistry said: “The proteins of the human body are tiny machines that in their billions, make up our flesh and bones, transport our oxygen, allow us to function, and defend us from pathogens. And just like a hammer relies on a metal head to strike pointy objects including nails, proteins have specialised shapes and compositions to get their jobs done."

“The AlphaFold method for protein structure prediction has the potential to revolutionise workflows in biology, allowing scientists to understand a protein and the impact of mutations faster than ever. However, the AlphaFold algorithm does not account for essential modifications that affect protein structure and function, which gives us only part of the picture.”

Dr Elisa Fadda from the Department of Chemistry said “The AI AlphaFold algorithm is capable or reproducing structural features of proteins that complement the 3D structures of sugars, without actually “knowing” that a sugar is there. This ability provides us a relatively straightforward strategy to complete the proteins’ structure with essential sugars, needed for its function.”

The recent introduction of AlphaFold and the accompanying database of protein structures (https://alphafold.ebi.ac.uk/) has enabled scientists to have accurate structure predictions for all known human proteins.

Dr Agirre added: "It is always great to watch an international collaboration grow to bear fruit, but this is just the beginning for us. Our software was used in the glycan structural work that underpinned the mRNA vaccines against SARS-CoV-2, but now there is so much more we can do thanks to the AlphaFold technological leap. It is still early stages, but the objective is to move on from reacting to changes in a glycan shield to anticipating them."