What deal comes after a no-deal Brexit? 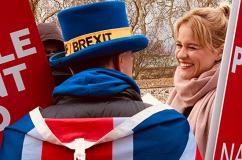 While a no-deal Brexit would cause massive economic and political shocks, the legal process to avoid a hard border is a lot clearer, writes Professor Tobias Lock, Department of Law

As preparations for a no-deal Brexit are in full swing, the main concern in Ireland is that no deal would lead to checks on goods crossing the border, which is precisely what the Irish government has been working hard to avoid.

However, one largely unexplored question is what deal comes after "no-deal’? Most forecasts seem to assume that the EU and the UK will live with "no-deal" between them for the long term, but this is highly unlikely. In the case of a no-deal, both sides would likely suffer an enormous economic and political shock and would probably quickly return to the negotiating table to mitigate the damage.

The immediate political fallout of a no-deal scenario is difficult to predict. It is an open question when negotiations between the two sides would resume. Luckily, the legal side of things is a good deal clearer. No deal would probably result in the UK having to swallow those bits of the withdrawal agreement it is finding so unpalatable, including the Irish backstop. It all comes down to the procedures for approving any new deal under EU law and under UK law.

Where are we now?
The withdrawal agreement agreed last December is currently stuck in the House of Commons, whose approval is a legal requirement under the UK’s EU (Withdrawal) Act 2018. Many Tory MPs and the DUP take particular issue with so-called backstop. Unless the future relationship ensures that there be no need for any border infrastructure on the Irish border, the backstop requires the UK to remain in a customs union with the EU, and additionally, Northern Ireland to remain in the single market for goods.

For the EU, ratification will be done on the basis of Article 50 of the Treaty on European Union. It requires approval by the European Parliament and a qualified majority of the 27 remaining EU member states. This means that no member state alone could veto the agreement. Purely legally speaking therefore, the EU could go over Ireland’s head and scrap the backstop altogether in order to avoid a no-deal. Politically, however, this is extremely unlikely to happen. Thus, no-deal is a serious prospect.

A new deal: old wine in new bottles
What might a new deal after no-deal look like? There is a fair chance that it would look very much like the withdrawal agreement. The need to wind up the UK’s membership would largely continue. Citizens’ rights and the "Brexit bill" would almost certainly feature.

As for the backstop, Ireland’s desire to preserve the Good Friday Agreement would not have gone away. In fact, it would be even more urgent given that Ireland and the UK would sooner or later need to conduct checks on goods crossing the border.

Procedure under EU law
And this is where the procedural aspects become relevant. In a nutshell, Ireland would be in a much stronger position legally as it would be able to veto any deal that did not contain the backstop. Article 50 as a legal basis can only be used to conclude an agreement with a member state that decides to withdraw from the EU. But after a no-deal Brexit, the UK is evidently no longer a member state.

This does not mean that the EU cannot conclude a new deal based on or even identical to the withdrawal agreement. It simply means that the EU-side must piece together various competence bases for the EU to be able to do so. But doing so would mean that the agreement could no longer be ratified with a qualified majority, but only by unanimity.

In addition, if the withdrawal agreement were to be ratified as it stands, it might even mean that this "new deal" would need to be ratified by all 27 EU member states. Such "mixed agreements" are quite common, but they bring additional difficulties with them. For instance, the Walloon Parliament was able to delay ratification of the EU-Canada trade deal in 2016.

For Ireland, this would mean it could veto any agreement that did not include the same guarantees on the Irish border as those provided for in the withdrawal agreement in the event of a new deal after a no-deal.

What happens in the UK?
Normally, the UK government need not ask the House of Commons for approval, but must merely lay a treaty before the House for 21 days. Once that period is over, it can ratify it, unless the Commons passes a resolution that it should not.

Should the UK leave the EU with no-deal on March 29th, it is very likely that both sides would return to the negotiating table sooner or later

Instead the much laxer normal ratification requirements would apply - and this might mean that the Tory and DUP opposition to the backstop might become irrelevant. It is one thing for an opposition party like Labour to be voting with the government and supplying it with a majority that it would not otherwise have, but quite another to simply sit still and not oppose a treaty laid before Parliament.
Should the UK leave the EU with no-deal on March 29th, it is very likely that both sides would return to the negotiating table sooner or later. Once negotiations recommence, Ireland would most probably have a veto on any new deal after no-deal whereas the UK government would have more leeway than it currently has. This is how the backstop might end up being agreed and a hard border on this island avoided.

Photo by John Cameron on Unsplash