What has the British army ever done for us? 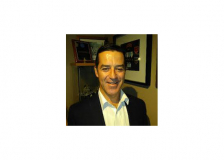 What has the British army ever done for us?

Money, education and opportunities explain why 150,000 Irish people served in the British army between 1793 and 1815, writes Jim Deery, PhD scholar, Department of History

The headline of this piece is borrowed from the provocative question asked by John Cleese in Life of Brian: "what have the Romans ever done for us?" The answer in this case might surprise you, especially when you consider you probably had an ancestor serve in the British army at some point.

Between 1793 and 1815, Ireland, as a part of Great Britain, was embroiled in a global struggle against Revolutionary and Napoleonic France. It was quickly recognised that Catholic Ireland could provide the manpower required to fill the expanding wartime British army. With an estimated 150,000 Irishmen in the army, large sections of Irish society were directly impacted by service in the British army.
Why did so many Irishmen join the British army? The answer is fairly simple: poverty. Over 40% of Irish recruits were labourers, which usually meant they were unemployed. With an attractive enlistment bounty, regular pay, clothing and food, the army offered a better life for many. This feature of Irish recruitment was to persist into the 20th century. Recent research has found that Dublin's working class were more rooted in the British military than in republican ranks during the period from 1916 to 1921.

But economic factors were not the only reasons for enlistment. Sergeant Major Adams of the elite 95th Rifles was originally an Irish rebel in the 1798 rebellion and hid in the last place anyone would expect to find him – the British army. Adams was eventually commissioned as an officer for bravery while serving in Spain and died in America. We know of Adams’ story through the memoirs of his friend, Benjamin Harris, a shepherd’s son from Dorset. Although English, Harris kept his Irish friend’s secret until after his death demonstrating the close bonds that existed between men whose friendship was forged in war irrespective of national, political or religious differences.

Service in the British army also offered opportunities otherwise not available to Irishmen. Within the North Gloucestershire Regiment, two Irish soldiers Bourke and Irvine held the most senior non-commissioned officer rank of sergeant major.  With little or no formal education upon enlistment, both subsequently attained the necessary numerate and literacy skills for promotion. Indeed, many regiments established schools for the specific purpose of educating soldiers affording many illiterate Irishmen an education.

Irishwomen were also part of the military system of the period. Ann Griffin from Kildare, who campaigned with the army across Spain, Portugal, and France, was the daughter of a soldier, married a solider and raised four soldiers. Each regiment allowed six wives per hundred soldiers to travel on campaign. Entitled to half the male rations and their children half again, these women acted as ‘maids of all works’, involved in cooking, cleaning, mending, and, in many instances, were de-facto nurses in combat. With the increased likelihood of a husband being killed, there were many instances of being ‘a widow at breakfast and a bride by dinner’.

One of the youngest recruits found in the North Gloucestershire Regiment was nine year old Jason Campbell from Fermanagh. Only 4 foot 9 inches in height, Campbell joined up in Plymouth in 1803. Most boys were drummers but this did not protect them in combat as Irishman Edward Costello recounts. "A little fellow, a drummer boy, belonging to the Connaught Rangers…, was lying wounded and crying bitterly, his leg being broken by a shot. On telling him I would get him carried, he cried "Oh no! I don’t care for myself. Look at my poor father, where he lies!" pointing to a man shot through the head, lying weltering in a gore of blood."

Former soldiers were seen as suitable for colonising newly acquired overseas territories. With experience of foreign travel and acquired military skills, they proved adept as settlers on the fringes of ‘civilised’ lands. Research of military pension records for the period found that 47% of former army veterans who received their pension overseas were Irish.

Ex-officers and soldiers also gained employment in the new police forces established in Ireland and Great Britain. Among the first commissioners of the London Metropolitan Police was Irishman Charles Rowan, a former major in the Oxfordshire Light Infantry Regiment. He recruited former soldiers, including Irishmen, who were to become a presence in the early days of ‘the Met’ and Rowan's views on discipline have been credited with ensuring the success of this new police force.

Despite the inequalities of early 19th century society, the British army offered a better life for many Irishmen and their families. The army promoted Irish soldiers based on merit and ability and many found a home in English and Scottish regiments. Revered or reviled, the fact remains that the British army was an important strand within the fabric of Irish society. Perhaps the final word should go to the tenement-born Dubliner who stormed the Normandy beaches in a later war. Asked why he enlisted, his reply reflected the simple reality of life for many: "I didn’t fight for king and country - I fought because I had no arse in me trousers". 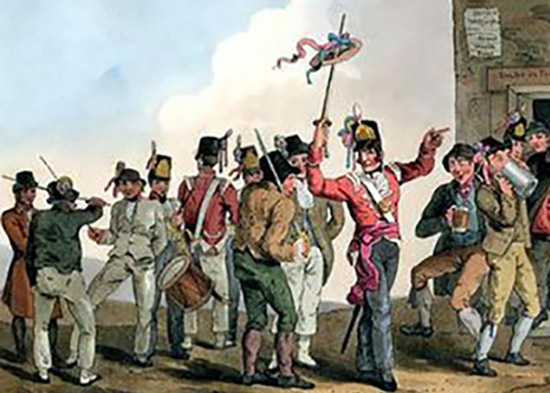