Why Silent Night is the anti-Christmas movie 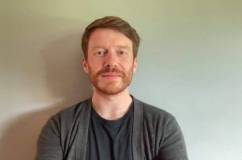 Why Silent Night is the anti-Christmas movie

Silent Night is perhaps the ideal Christmas movie for these times of anxiety around emergencies like climate change and Covid-19, writes Dr Julie Rodgers and Peadar Kearney, School of Modern Languages.

We are all familiar with the stereotypical Hallmark family scene: Christmas pyjamas, decorations aplenty, blazing fires, mince pies and, of course, the unrivalled seasonal staple, the Christmas movie. Feel-good films such as It's a Wonderful Life and Miracle on 34th Street are exemplary of the genre, our expectations for the overall tone and mise-en-scène of the Christmas movie are cemented well in advance of the viewing. The spectator seeks comfort, nostalgia, a happy ending and a general sense of cosiness.

So how then does the typical Christmas movie lover react to Camille Griffin's directorial debut Silent Night, whose plot and message are the antithesis of festive cheer? The explicit reference to a well-known carol in the film title along with the casting of Keira Knightley, whose name has now become synonymous with another much-cherished Christmas movie (Love Actually), seem to suggest that viewer expectations will be fulfilled.

This is bolstered by the opening scenes where family and friends gather in an idyllic country mansion, dressed in their finery, laden with presents and preparing for a delectable feast of traditional Christmas fare, all against a backdrop full of glowing lights and Christmas music. Unless one has read the reviews in advance, it is fair to say that the spectator is ill-prepared for the apocalyptic turn of events that is eventually revealed.

Yet we can see from the beginning how the film is consciously toying with the generic rules of the 'Christmas film'. Somewhat jarring is the way in which the youngest characters begin to swear in front of their parents, and the happy family at the centre of the narrative is soon fraught with tension, regret and sexual jealously. Before long, the film presents us with its ultimate narrative twist.

We learn that this Christmas party will in fact be the last for the attendees– an unstoppable poisonous gas is sweeping through the country, killing all in its path in what they have been told will be a painful death. The gas, due to arrive on S Stephen's Day, has been caused by years of human pollution in spite of numerous warnings (a ‘Greta’ is namechecked in this regard). The government has mandated suicide pills to ensure all of those who take them a pain-free death before the gas arrives.

From this point onwards, the friends and family begin to argue about whether it is right to trust the government’s proposed solution or to ignore the warnings and risk the consequences. Further ethical questions are raised when we learn that the state is unwilling to provide their proposed solution to the homeless or illegal migrants.

Given the timing of the film’s release, parallels can undoubtedly be made with the Covid-19 situation: a collective reaction to a broader social crisis that threatens the health of all and scepticism with a state-provided solution to the problem. But any potential for an anti-vaccine reading of the film is unfortunate and contrary to directorial intention as filming for the movie wrapped up in November 2019 in advance of the initial outbreak of the pandemic.

It is more fruitful to focus on what Silent Night does most well; that is, transposing the consequences of climate change from the near future to the immediate present. If there are similarities between the film and the current situation in which we find ourselves, it raises an extremely pertinent question - what if our collective reaction to the climate emergency was as quick and decisive as the one to Covid-19?

Silent Night is a new breed of Christmas movie for the climate change generation. It disrupts our normative expectations of the genre and yet, in its depiction of our worrying global environmental reality, it is perhaps the ideal Christmas movie for the current context of planetary crisis and increasing social anxiety regarding Covid-19. The Christmas movies that we are more familiar with reflect life as it was during the 'old normal'. As public belief in an eventual return to this ‘old normal’ wavers, this Christmas movie similarly appears to have lost hope.

But rather than interpret this in a depressing way (indeed, the film is replete with darkly comedic exchanges), it might be more useful to see Silent Night as a wake-up call of sorts. While it may not be the kind of Christmas movie that is conducive to fluffy slippers and selection boxes, it is a filmic text that incites important reflection on human apathy towards environmental catastrophe. We should remind ourselves that It's a Wonderful Life and Miracle on 34th Street similarly dealt with serious social, political, and cultural issues pertinent to their time, but now seem comforting within the context of the Christmas narrative.

In a society saturated on a daily basis more than ever before with technical data, Silent Night is a keen reminder of the capacity of the arts to engage with thornier questions relating to the existential aspects of climate change and the pandemic that cannot be addressed solely by the principles of science.