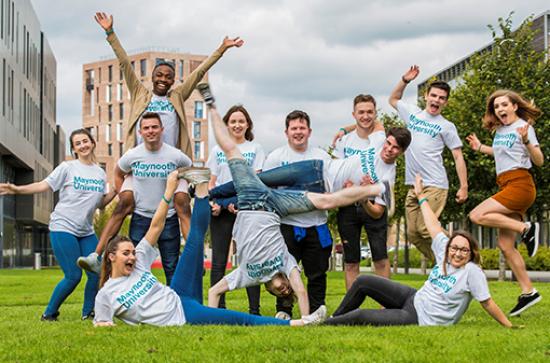 On Saturday, 2 September, Maynooth University welcomed 900 students for registration for its weekend-long Launchpad programme, the first step in a semester-long phased induction programme for Access students about to embark on their undergraduate journey. The programme aims to ease new students, who are often the first in their families to go to third level, into university life in a supported and friendly setting.

Launchpad is unique in Irish higher education due to its scale; over 900 new students and 1,100 of their supporters attend the programme. Students attending Launchpad have entered Maynooth through HEAR (Higher Education Access Route), DARE (Disability Access Route to Education), further education and training, or the entry routes for mature students.

Maynooth University Access Programme was established in 1998 to increase the numbers of students from under-represented backgrounds getting to and through the university. The vision is to develop a student body in Maynooth that reflects the diversity of Irish society. Maynooth University works in partnership with the campus community, primary and second level schools, further education and training providers, NGOs and other higher education institutions to widen access and participation at third level.

Maynooth University Vice-President Academic, Professor Aidan Mulkeen, stated: “Maynooth University is committed to ensuring that our doors are open to everyone who can benefit from a Maynooth education. We recognise the transformative power of higher education and how it can elevate individuals, families, and entire communities. We also know that education is key to reducing the myriad of inequalities that exist in Irish society today. Over the past 20 years, Maynooth University has been built on the core principles of equality, inclusiveness and social justice.”

Karen Herdman, a mother with two children, returned to education in 2007 and is now a lecturer in Chemistry for Maynooth University. She said: “Maynooth University Access Programme really gave me the tools to begin my exciting first year in the university. With the support of wonderful staff, I have completed my degree and PhD. I received several job offers within weeks of finishing my PhD, but chose to stay in Maynooth University to give to other students some of the support and guidance that were offered to me by Maynooth and the Chemistry Department. I am really proud to be the Chemistry Department’s access programme co-ordinator. I can’t recommend the Certificate in Science or university highly enough. I would like to wish those who begin their studies this year the best of luck.”

Case Studies
Leon Diop has just graduated with a degree in Psychology and is the first in his family to attend university. He is the new President of Maynooth’s Student’s Union. His campaign theme centred on social justice issues.

“I grew up in Tallaght in a one parent family. My mother is Irish and my father is Nigerian. I attended St Marks Secondary School, which is one of the schools which participates in the DEIS programme. My guidance counsellor encouraged me to apply through the HEAR scheme – the HEAR programme is very important for students, like me, who come from families and communities where no one has progressed to third level and where the cost of college can seem very prohibitive.  Many families on low incomes/social welfare know that the SUSI grant can't cover the full financial cost of attending university and are worried about the financial strain.  I’m very passionate about equity of access to higher education and have been an ambassador for Maynooth University Access Programme and volunteer every year as a senior student leader for the Launchpad programme. I want to reduce the risk of students dropping out of college because they feel isolated and don’t know how or where to ask for help.  Launchpad was critical in supporting my transition to university – I want other students to have this positive experience.”

Saoirse de Paor started in Maynooth after finishing the leaving certificate in 2010. In the following years she became increasingly unwell.

“By 2014, doctors identified that I needed a liver transplant. I received a new liver the same year, spending a significant period of time in hospital. But I was persistent! I returned to Maynooth University in 2015, switching to a classics degree. I will graduate in November 2017 with a first class honours degree.  I’ve been an ambassador for Maynooth University Access Programme and volunteered to help the next generation of under-represented students reach their full academic potential.”

Karen Herdman from Kildare was a stay at home mum with two young sons and is now a lecturer in Chemistry in Maynooth University, having successfully completed her PhD. She returned to education by enrolling on the Certificate in Science course in Maynooth in 2007.

“I was informed that the Foundation Course would give me an automatic place on the Bachelor of Science degree if certain grades were attained. I did a maths introduction course with Maynooth University Access Programme during the summer and started the Certificate course in September. The Foundation course was of great importance to me. It gave me the confidence to know that I could return to third level education and complete it successfully.

“Having met similar mature students and become friends it was less daunting to start an undergraduate degree with hundreds of younger people. During the four years of my degree, I received first class honours in my subjects, was awarded first prize for the highest overall Chemistry Laboratory marks, first prize for the best marks in Chemistry, first prize for the highest mark in Psychology through science and the Kathleen Lonsdale prize for the best 1st class degree for single honours chemistry. The Certificate course taught me how to manage my time between home and study.  It also showed me how to approach exams. It gave me confidence in my ability to continue studying.”

For more information on Launchpad or on the Maynooth University Access programme, see here.