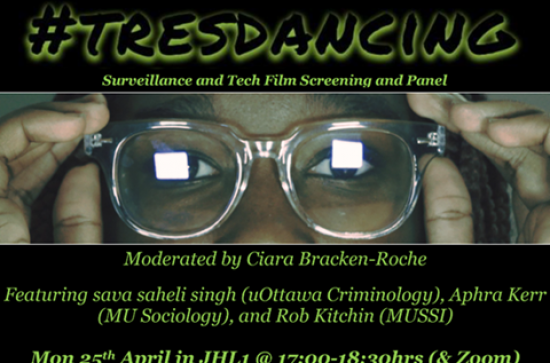 By Katelynn Doran and Ashleigh Pillay

On Monday 25 April 2022, Dr. Ciara Bracken-Roche hosted a film screening and panel discussion at Maynooth University. The event featured the short film called #Tresdancing and was followed commentary from the co-creator Dr. sava saheli singh, and academics experts from Maynooth University: Professor Aphra Kerr and Professor Rob Kitchin. The hybrid event was accessible in person at MU and via Zoom, and 100 attendees were present in total.

#tresdancing is a short, near-future, fiction film focused on the issues surrounding the use of algorithms, artificial intelligence, and surveillance in the context of educational technology. #tresdancing is the fourth film in the award-winning Screening Surveillance series. All films from this educational project demonstrate how surveillance and new technologies of surveillance are being developed and the potential dangers they have on people and society.

The film begins with student Francessca, the protagonist, who failed her online math exam and as a result must repeat the year, unless she agrees to partake in a trial project. This requires her to wear ‘smart’ glasses that record everything she sees and asks her to perform tasks based on her surroundings. The trial begins with her answering math problems to earn points, but as the program continues it shifts to asking her to perform community tasks and report crimes. This film highlights the (un)ethical and moral decisions that Francessca is forced into because of these new technologies.

Singh spoke on how the specific context of the film was to highlight the concerns with the way educational surveillance technologies have been introduced over the course of the covid19 pandemic. This adds to the film series with the overarching theme of surveillance, but specifically highlights the dangers of scope creep when the goals of the trial project are not made clear to the student or her parents. #tresdancing further highlights how the extent of surveillance and algorithmic features that accompanied the technology are unclear and perpetuated by what singh called the illusion of choice and consent.

An important topic discussed in the panel was about how these technologies target certain groups of individuals more than others, with Singh stating that this leads to the over policing of individuals from ethnic minorities and indigenous groups. Kitchin added that as the technologies are already built and created with biases, their applications will also display these discriminatory aspects. Kitchin also called attention to the unethical practices of not only the technology but the fact it was offered to a child without parental consent or even granting them a full explanation of what the student is consenting to. Kitchin questioned who had access to this data, the role of the teacher, school and government and how these entities should be working. Kitchin highlighted that the decisions to bring technology into society are made at an institutional level. This was emphasized further by Kerr who was concerned with how important it is to raise awareness about the impacts of educational surveillance technologies and how one might go about doing so. She explained that awareness starts with communication, talking with your family, friends, colleagues, and wider communities. Letting discussions happen, allowing people to be educated, and form their own opinions. One of the strongest take home points was that widespread awareness and change is not possible on an individual level, but individuals can feed their concerns and experience into their community to work collectively.

The event ran smoothly, with Dr. Ciara Bracken-Roche hosting and Dr. Joe Garrihy running the online logistics and provided great insight into the distinct ways that surveillance creeps into different aspects of our lives. After the screening and panel discussion there was an opportunity for attendees to pose questions to Dr. Singh, Professor Kerr, and Professor Kitchin.

All films in the award-winning Screening Surveillance series, produced by sava saheli singh and the Surveillance Studies Centre at Queen’s University can be found here: www.screeningsurveillance.com. While the fourth film featured at the event can also be found here: #tresdancing. 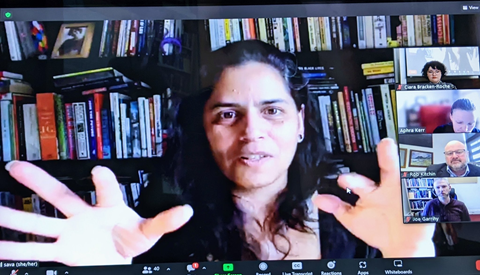 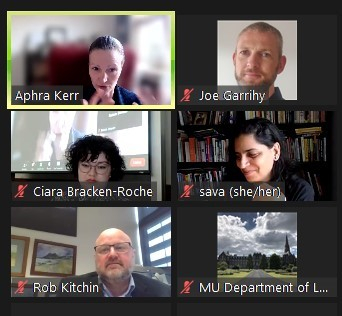