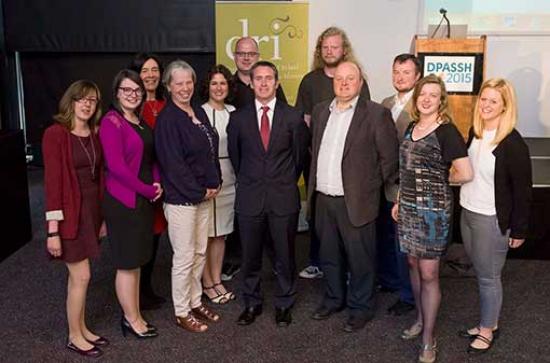 Maynooth University has placed six collections of national importance into the Digital Repository of Ireland (DRI), which was launched today by Damien English TD, Minister for Skills, Research and Innovation.

The user-driven design and implementation of the digital repository was led by researchers from Maynooth University, who also led the development of the policies, guidelines and procedures underpinning the DRI.

Commenting on the launch, Damien English, TD, Minister for Skills, Research and Innovation said: “Fostering collaboration in the academic sector is central to Government’s Action Plan for Jobs and the launch of the Digital Repository of Ireland is indicative of the powerful outcomes which can be achieved when strategic collaborations, with support from cultural, social and industry partners, are facilitated. Together the partners involved in this project have created a valuable resource which will serve to safeguard Ireland’s rich social and cultural data, benefitting research, education and the public at large.”

The collections deposited into the DRI by Maynooth University are:

The repository, which can be accessed at http://repository.dri.ie, is the result of nearly four years of research, software development, policy and legal framework design, and data curation by digital archivists and librarians.

Director Dr. Sandra Collins invites everyone to visit DRI online: “DRI offers exciting historical, cultural and contemporary content that tells the story of Ireland and its people. The content comes from some of the finest institutions across Ireland, and is available without charge for people to view and to enjoy. Some of the collections we care for are restricted by copyright or the sensitive nature of the data, but researchers can request access. We are an open repository, and we want people to explore and enjoy their cultural and social heritage.”

Deputy Director Dr. Natalie Harrower said, “DRI has been built from the ground up, following rigorous national requirements analysis, international best practices in data archiving and preservation, and aided by a series of rich collaborations and partnerships with heritage and research institutions across the country. The Repository not only makes available Ireland’s social sciences and humanities data to researchers and the public – it preserves it for future generations. Protecting against data loss helps to protect against the loss of our collective cultural memory.”

About the Digital Repository of Ireland
The Digital Repository of Ireland is a national trusted digital repository for Ireland's social and cultural data. The repository links together and preserves both historical and contemporary data held by Irish institutions, providing a central internet access point and interactive multimedia tools. As a national e-infrastructure for the future of education and research in the humanities and social sciences, DRI is available for use by the public, students and scholars.