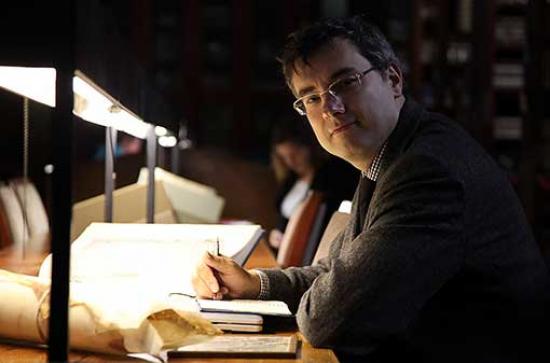 Professor David Stifter of Maynooth University has been awarded €1.8 million in funding by the European Research Council (ERC) for a project that will date a large number of 7th–10th Century Irish texts and develop innovative methodologies for dating languages that will be applicable across the world, shedding new light on medieval literature, history, and culture.

The highly prestigious award is viewed as the gold standard for research funding in Europe. Prof Stifter is one of an elite group of recipients in the Social Sciences and Humanities Consolidator grant category this year and one of only two in Ireland. In total, 516 applicants from 29 different countries competed for the funding.

Professor Stifter, Head of Maynooth University Department of Early Irish, will lead a team of five researchers on the project known as the Chronologicon Hibernicum – A Probabilistic Chronological Framework for Dating Early Irish Language Developments and Literature. “ChronHib” will develop and use innovative methodologies and sophisticated software to perform linguistic analysis on a large body of early medieval texts. By looking for subtle changes in the language over the centuries and by applying advanced statistical methods, Prof Stifter will be able to profile language variations in texts of that period. The major result will be a ChronHib database, which will serve as the key reference point for the linguistic dating of Irish texts and will then provide a model for other old languages in Europe and beyond.

Prof Stifter said researchers around the world will be able to use these new dating methods in a way similar to how tree-rings serve as chronological indicators in archaeology.

“Linguistic dating is about to take a huge leap forward into the technological possibilities of the 21st Century. By developing and utilising unique methodologies that help us to accurately date these fascinating medieval texts and create linguistic profiles of their language, we are linking the past with the present. Given the complexity of Old Irish, the success of this project will represent a new model for the study of other languages that researchers all over the world will want to emulate,” Prof Stifter said.

An Austrian by nationality, Prof Stifter’s fascination with Celtic languages and Maynooth University’s unique reputation internationally in the field of Irish linguistics drew him to Ireland. Professor Stifter recalls: “Studying in Vienna, there was an adage in my department, ‘If Maynooth speaks, it is time to listen,’ so when the opportunity arose to come to Maynooth, I jumped at it.”

Maynooth University President, Prof Philip Nolan, recognised the importance of the award: “This award continues the long tradition of excellent research at the Department of Early Irish at Maynooth University, and I have no doubt that Professor Stifter’s work will significantly advance our understanding of some of the world’s early languages and cultures.”

Colleagues in his field have been quick to commend Professor Stifter, and there is a palpable excitement surrounding his research.
Prof Gregory Toner, Professor of Irish at Queen’s University in Belfast and Director of the Electronic Dictionary of the Irish Language said: “This exciting project provides innovative, cutting-edge solutions to the thorny problem of the accurate dating of medieval Irish texts. It has enormous potential to solve many issues in the field and contribute to a significant improvement of our understanding of medieval Ireland.”

Professor Mary E. Daly, President of the Royal Irish Academy: "As the holder of several of the most important medieval manuscripts, Royal Irish Academy has, from its foundation been keen to elucidate questions such as the absolute dating of texts.  We congratulate Professor Stifter on this prestigious award."

Professor Liam Breatnach, Director of Celtic Studies at the Dublin Institute for Advanced Studies: “I congratulate Professor Stifter on his success in gaining ERC funding for this important project. In its comprehensive approach to dating early medieval Irish texts the Chronologicon Hibernicum project will provide an essential resource for the study of early medieval Irish language, literature, history and culture.”

Professor Stifter is also the ​Director of the MA Medieval Irish Studies at Maynooth University​.

About the European Research Council - Set up in 2007 by the EU, the European Research Council is the first European funding organisation for frontier research. The ERC operates according to an 'investigator-driven', or 'bottom-up', approach, allowing researchers to identify new opportunities in any field of research, without thematic priorities. Every year, it selects and funds the very best, creative researchers of any nationality and age to run five-year projects based in Europe. Since its launch, the ERC has funded over 4,500 researchers. Under Horizon 2020, the new EU research programme (2014-2020), the ERC has a budget of over €13 billion.